No breakfast today! D: I know right, what the hell am I going to show you pictures of then?

We headed to the shinkansen in the morning to get a train to Osaka, which didnt really seem a whole lot different to the rest of Japan if im honest, kind of disappointing but oh well. 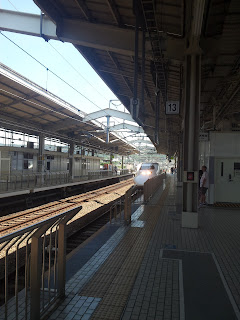 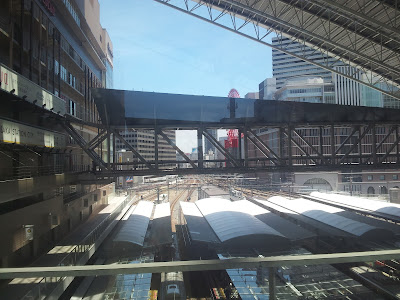 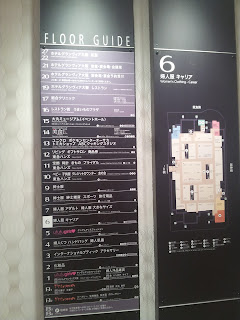 We went into a department store nearby to Osaka station, a look at the floor guide showed 1) That it had 27 floors, 2) that it had a Pokemon center on the 13th floor. Obviously, that was our first destination.
It was pretty small, yet filled with all sorts of toys, decorations, kitchen ware, toiletries, card stuff, keyrings, jewelery… everything imaginable. There were even some pokemon arcade machines (which i think involve the card game somehow). Brother bought some keyring things and a plushie snivy, I decided against buying anything.
Nearby also was a cooking class kitchen sort of thing, sort of interesting to see as im not aware of anything similar in the UK (not one that takes place in the middle of a department store anyway) 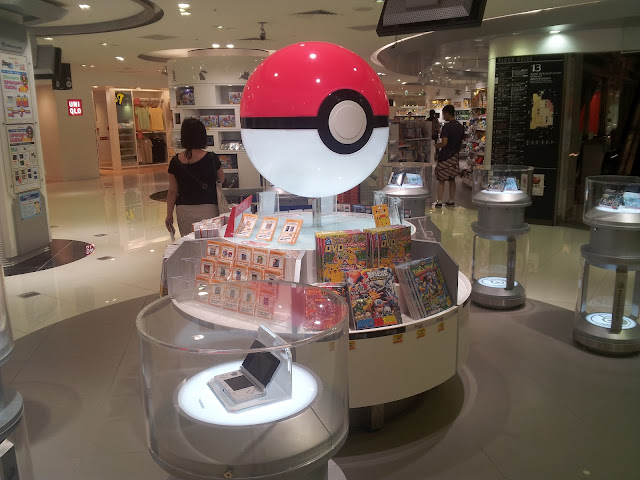 We stopped in a clothing shop and bought some summer clothes, I personally didnt pack anywhere near enough shorts and vests as when we checked the weather forecast in the UK it had predicted thunderstorms (and we’ve had 35~ C weather every damn day). They had some sort of promotion thing going on for the metal gear solid anniversary, so I bought 2 MGS inspired shirts, one with the various outer heaven company logos (foxhound, raven sword, mantis, etc) and one with the quote ‘neither friend nor foe’ and a exoskeleton style pattern on the back. Bought a dark knight shirt as well, because it looked cool. Picture here

Lunch was at a buffet restaurant, the price was pretty reasonable for Japan, with inclusive drinks for 1900 yen, around £16. They provided some interesting plates ive never seen before, similar to a cupcake tray – which is clever because at a buffet, all you really want to do is have a little of everything anyway.
They had a ton of foods, too many to really name, highlight was probably fresh sliced tuna and the crab legs.

Afterwards, a trip to the Umeda sky building, via way-too-damn-hot street and too-long-too-many-stairs underpass. On the basement level was what we came for, a pseudo recreation of 20th century Osaka in festival season, with themed restaraunts and workers, it was all pretty cool to see, but a little smaller than we would have hoped for the amount we had to walk to get there.Outside there was some people filming a new haunted house which had just opened, it looked creepy. In retrospect we should have visited it, but at the same time, even looking at the picture advert on their website is creepy as fuck. 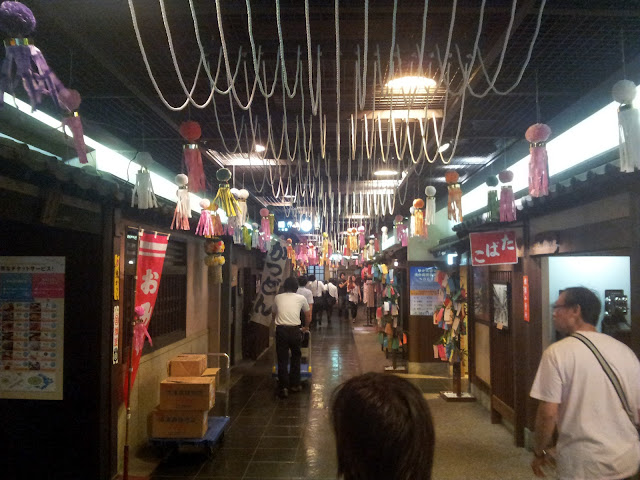 Next up, Namba, a district just outside of Osaka, famed for its strip of food shops. 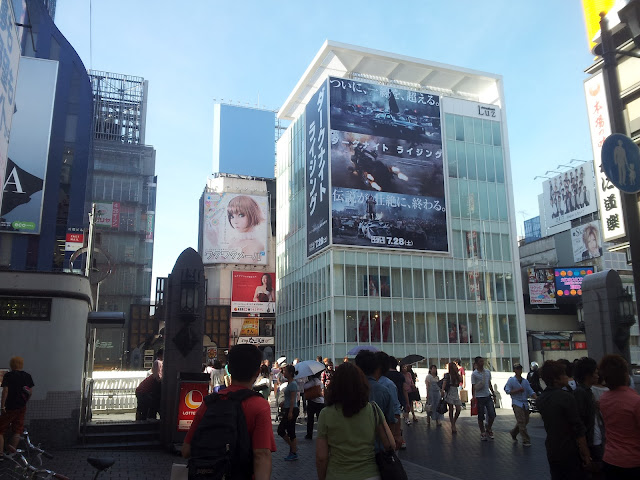 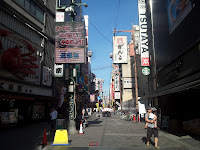 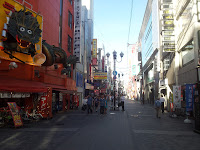 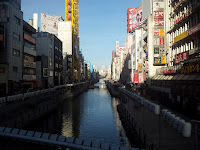 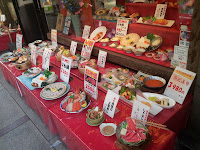 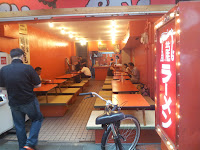 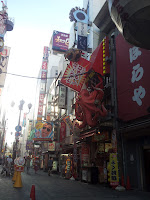 We stopped at a mcDonalds to get our bearings and have a cool down (any excuse to have a sit down in air-con at this temperature), tried their new ‘Tropical Soda’ McFlurry, it was pretty bad, bright blue and with extremely sour powder candies (a lot of them, way too many of them)
The rest of the area was cool, although not a whole lot I can describe, just lots and lots and lots of food shops and neon lights, the streets (similar to most of japan) just seemed to go on forever and split like a mesh.

Namba is also apparently filled with its fair share of Pachinko parlours, like a 2 floor one, and then one opposite it, and then 3 more less than 20 meters away. I dont understand how so many Japanese people can spend their money and time on flinging metal balls around for a chance at winning… more metal balls, apparently you cant even trade the balls in for money (legally anyway). I guess its something you need to be japanese to understand. Speaking of being japanese to understand…. 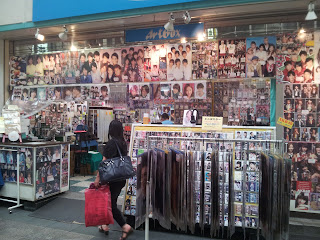 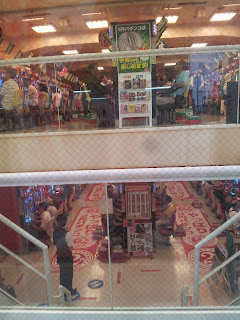 Unrelated, ice cream lolly vending machine is fucking awesome in a hot country. I bought a lychee one. It was good. 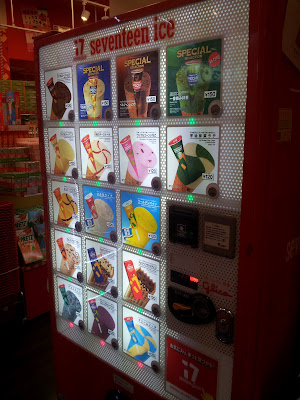 Also unrelated (lots of these today), tried a can of Kirin lemon, expected my life to become all kira-kira (sparkly) like it says in the perfume adverts http://www.youtube.com/watch?v=N9KxMzFkpS0, sad reality is that its a lemonade with 6% alcohol and ends up having a pretty bitter aftertaste :/

Dinner today was at a restaurant called ‘Tamago to watashi’ (which i translate into English as ‘Egg and Me’, it is – arguably, more catchy in Japanese. The food is all centered on the Japanese classic ‘omu-rice’, which is rice enveloped in an omlette, served with… stuff. I got the Hamburger omu-rice which came with a sort of gravy and tomato rice, it was pretty good although a little on the small side. 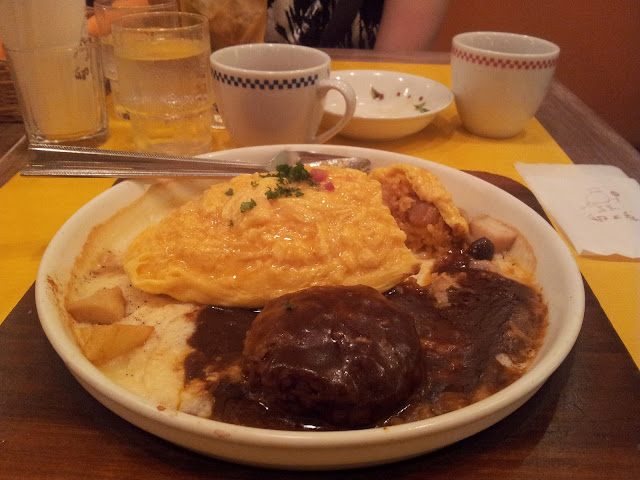 And thats it for today, seems kind of uneventful compared to the other days, but still pretty tiring.