Woke up just in time to see the rain begin to pour, the next few days here are predicted for thunderstorms (infact, they have been predicted for the past week, but I guess they were moved back a week), we waited for the rain to die down a little and then headed out in search of some brunch. A travel around 1 of the 3 malls near Kyoto station lead us to an okonomiyaki restaurant, Okonomiyaki is a plate fried mix of egg, cabbage and other mysteries, the place we were at had a hotplate embedded into the table and after ordering, the waitress comes and cooks your meal from scratch in front of you on the table. Starting with mixing up the cabbage, egg and meats, and then frying it on the table, flipping it, and then adding fish flakes and finally some mayonaise and special sauce (process taking about 20m), once done, you eat it fresh off the hotplate using a spatula and chopsticks. It was pretty damn good, we had a pork and prawn one, a squid and pork one and a potato and cheese one, all very nice. Im glad we got to experience this famous Japanese dish before leaving Kyoto.

After our brunch, we headed off to Inari, to see the famous Inari shrine, you may also know this as ‘that shrine with a thousand red gates’, it starts off as a pretty normal shrine, then goes uphill via stairs and leads to smaller temples, then smaller temples, then the uphill path with the many many red gates. The gated pathway goes up the mountain and curves around, I think the map said a few kilometres of it. We were progressing upward when the rain hit, and it really hit. Possibly the loudest thunder I’ve ever heard made us all jump and decide to call it quits, we were holding umbrellas and didn’t really fancy being electrocuted on the side of a mountain (saying that, dying on a shrine path is probably one of the ways to ensure your progression to a favourable afterlife). 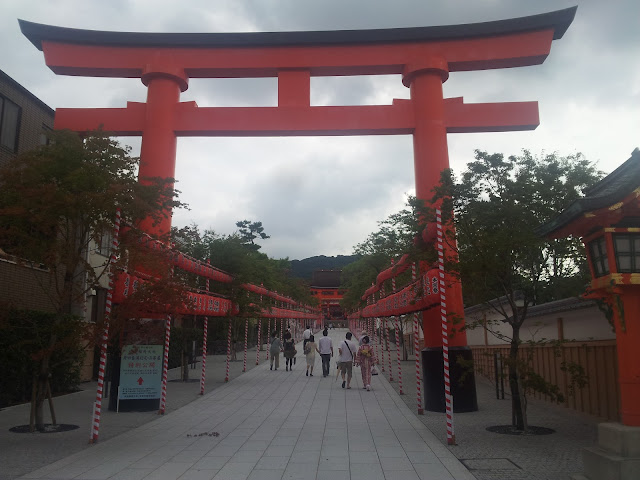 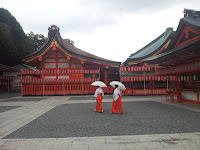 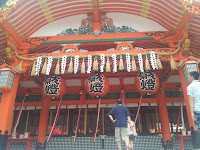 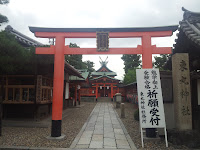 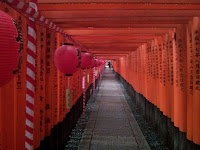 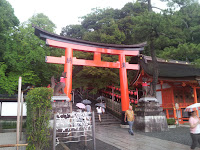 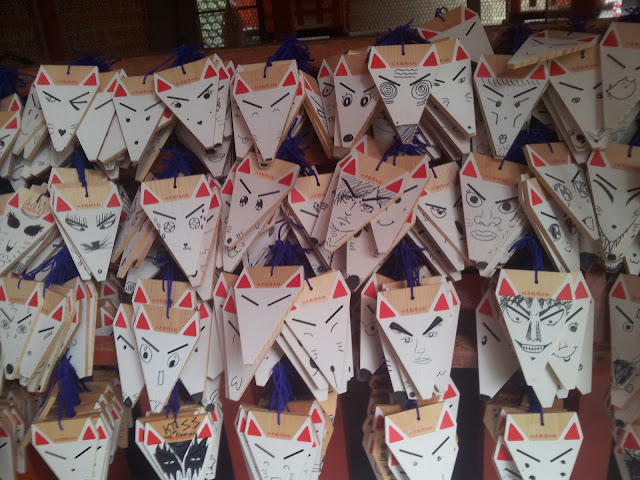 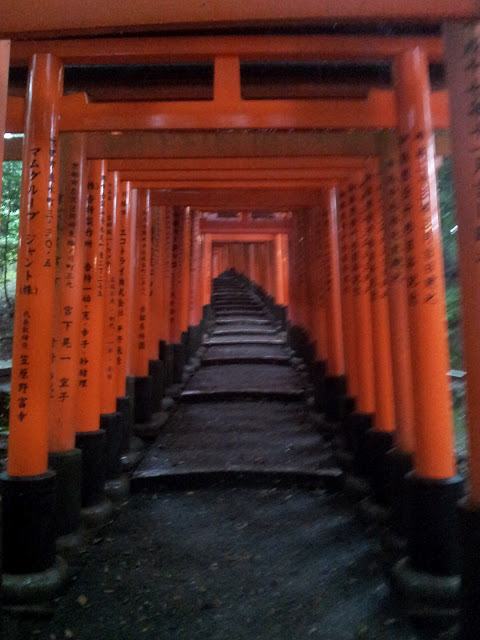 We were kind of lost after this, we had originally planned to head to another shrine or the Nara region but the heavy rain had kinda shattered that plan. We decided to head back to the station and just shop around, we head to Avanti, another shopping mall intended mostly for women, mum had a browse around for clothes, we found a few cooler shops on the top floor, a shop selling trading cards (so many fucking cards. forgot to take a photo) – the back room of the card shop had a battle area, which was filled with trap card activating kids/teens. Also on the top floor was an anime shop, where I ended up buying a Panty and Stocking Belt (pic already uploaded on twitter) – mostly because where the hell else in the world am i going to find an anime belt, let alone one of a series that is relatively unheard of, Helps that it was at a decent price as well (cheaper than most plain belts). Also, Ika musume pasta set (amongst over anime food items) 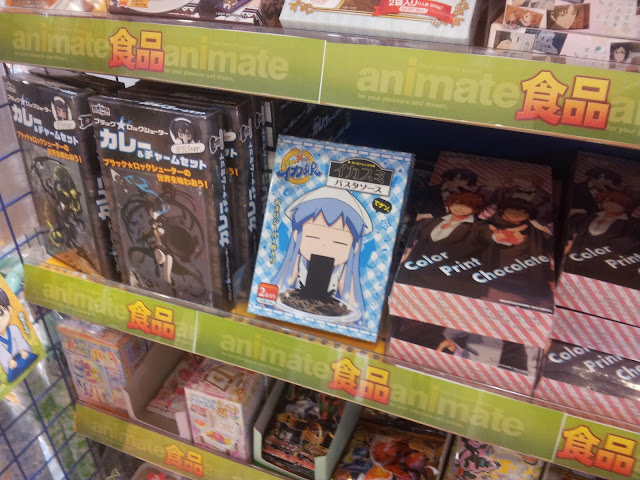 Down to B1 for the usual food browsing, bought some crepes, chocolate ice cream with banana and a strawberry/banana one, yum. Travelled back to Yodobashi next (the city block sized department store), we only really got to explore it for a little while last time because it was closing, but we spent a full hour or 2 in there this time (and still didnt cover everything).
Highlights include bladeless,quiet fans (the crazy circle ones as seen in KoreZombie), the gundam toy section (and figurine collection in general, which was huge), the fridges (massive, and so advanced – a few had a camera on the front, felt very HAL), video game section (was demoing the new 3DS LL,. verrryy very nice, if they have found a way to bypass region locking I may pick one up – assuming the console gets some good games), also the Puzzles section – after browsing anime puzzles for ages, ended up buying a Ghibli Spirited away 1000 piece puzzle (around £20) – I have a pretty big space on my wall at home and figure i’ll get a frame and stick it there, expect another blog post when/if I finish it and get it up. 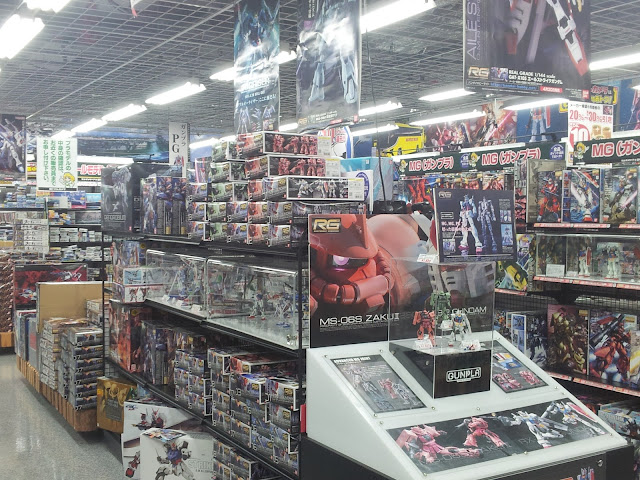 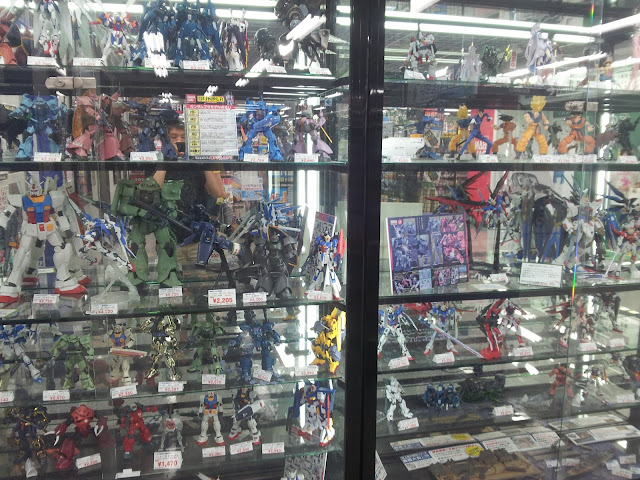 Dinner was another conveyer belt sushi restaurant, this one was better than the last though, with way more variety and chefs, the belt being constantly refilled with fresh sushi of types I had never even seen before. For example they had one with grilled sweetcorn on the top – so delicious. My brother and I had around 25 plates between us, thankfully all plates were around 130yen each (or £1 per plate, a pretty far cry from London where yo-sushi will charge you between £2.50-£5 per plate) 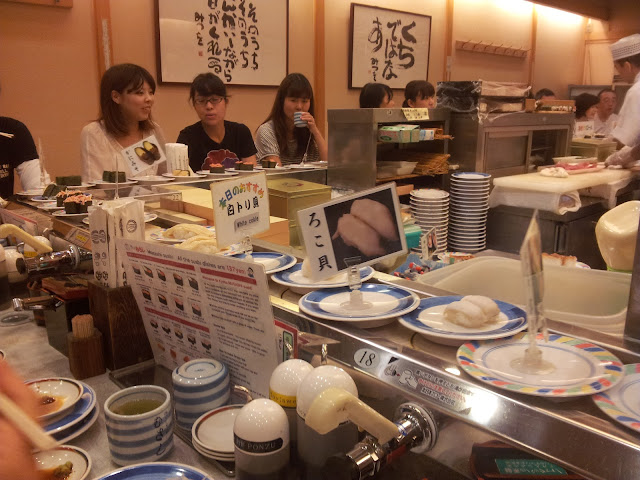 Finally, a trip to an arcade we discovered earlier – Me being keen to get the most out of my new E-amuse card, played some more Sound booth and IIDX, my brother went to challenge people in persona 4 (and subsequently get raped), he apparently beat someone at SSF4 though. Bought some of our favorite drink on the way home – the awesomely named Suika Cider 500 (reminds me of super cider squeezy 6000), its a fizzy watermelon drink (and isn’t actually alcoholic, despite its name)
That concludes our visit of Kyoto, tomorrow we are checking out of here and returning to Shiinamachi in Tokyo