Our final full day began with breakfast at a local 24h fast food place, and by fast food I mean I had a Katsu Curry with rice, ordered via vending machine and served up within 3 minutes or so. It was pretty good, although their ‘curry’ is pretty different from ours, being more on the sweet side than having any sort of spice. 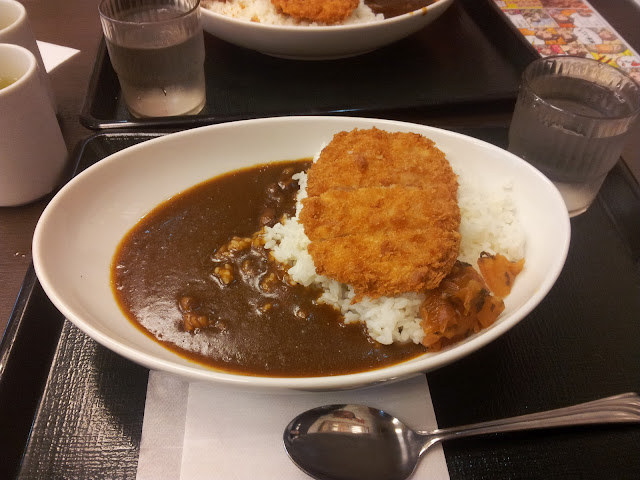 The train journey to Odaiba is a long one, requiring Shiinamachi -> Ikebukuro -> Something -> Odaiba (around 1hr total), the area itself is a man-made island, essentially created for the sole purpose of being awesome – kind of made as a theme park island, or it certainly has that kind of vibe about it.
We arrived to loud live music playing, and followed our ears to a stage, where some guy was singing – probably a nobody (since he was advertising his first single / Mini album) but I took some pictures anyway just to make sure. 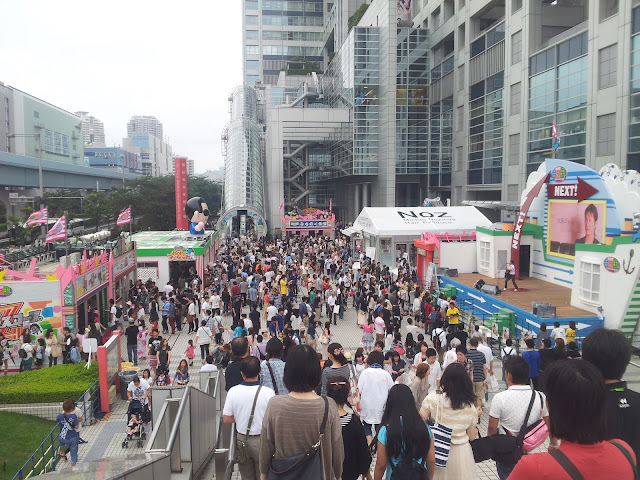 The Fuji TV building has some crazy architecture, looking like something one would make in Minecraft (and something that I may just have to attempt to try and make in minecraft), the inside is full of themed goods, props, trivia, advertisments and more of a ton of the shows which air on the channel; Being from England, most of the stuff showcased was completely lost on me, although I did spot some cool merch/stuff from a few things I did recognize from the internet (a Perfume signature, and lots of anime merch – turns out AnoHana, C, Tatami Galaxy and a few other shows I have seen were aired on Fuji. There was also a poster for the live action series of Mirai nikki, the girl doesnt look anywhere near psychotic enough though).
Got some taiyaki from a shop downstairs and then continued searching the area, ran into a small Statue of Liberty (because Japan is basically America anyway… or something). 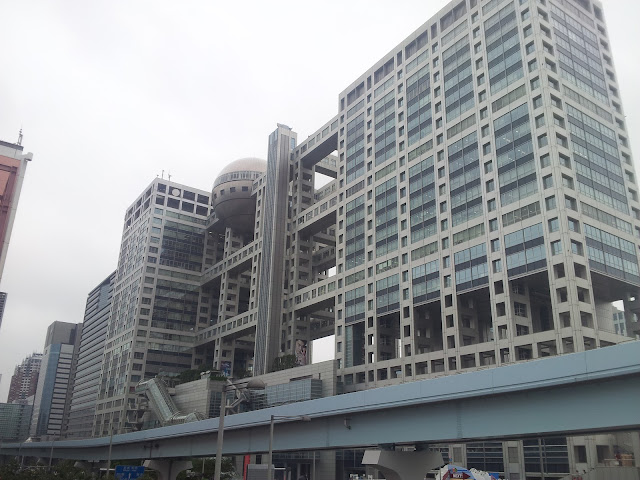 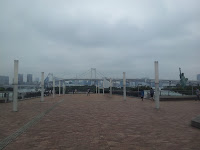 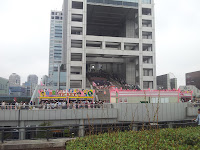 Across the nearby bridge we were lead to another area, again resembling some sort of theme park, lots of smaller stands here selling all sorts of merch for overpriced amounts, and a bag check area past a ticket sales booth…. Now i’m not actually sure what the ticket booth was selling for 1500yen but we walked past the gate area and didnt get stopped, and everyone else was wearing neck passes… I dunno. whatever, past the ticket area was a massive events stage (nobody on it though sadly) and more Japanese related stands selling things which reference things ive never heard of. There was also a massive One Piece area, which my brother was very fond of, giant statues of all of the major characters, themed food shops, a bouncy castle boat thing, some mermaid with massive tits.. etc etc. We spent a while just looking around the area, one of the highlights for sure which I didn’t get a picture of was a robotic dude which did a wave like dance when you pushed a button, watching people press the button then gather around in front and behind it to participate in the circle wavy dance was awesome.
Oh yeah, giant turd-gundam too. 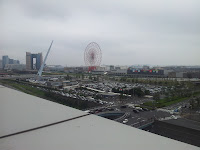 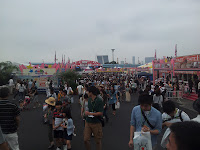 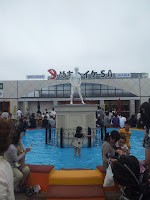 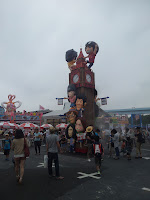 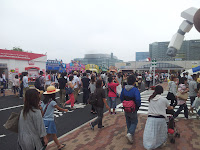 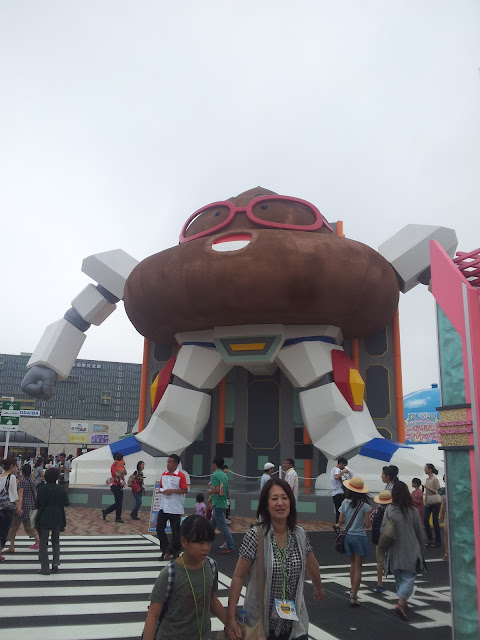 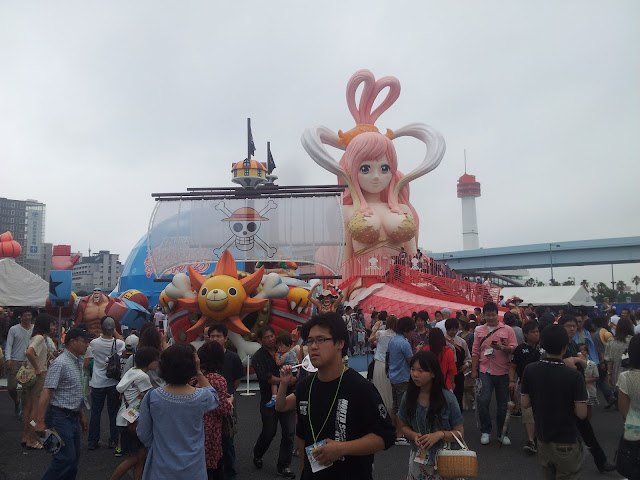 Next up, we passed by a park like area holding a ‘food world cup’, featuring food from 12 different countries, yet mostly cooked by Japanese people, with menus in Japanese, and with Japanese rice.
The England one was the best, with such popular British dishes such as ‘Roast beef with rice’ and English Curry (which looked strangely similar to the beef curry I had for breakfast). 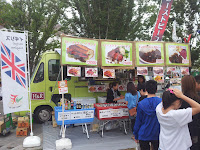 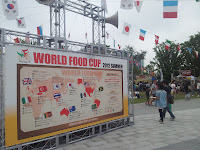 Around the corner from here, in front of yet another mall, was the famous Gundam (sadly, does not actually fly and shoot things), the level of detail on this thing was pretty impressive, especially the jet engines on its back (un-photographed), behind it obviously is another Gundam Cafe. 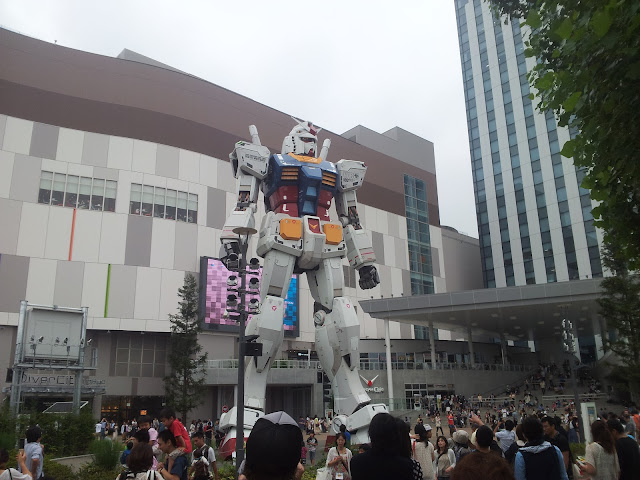 We had a little walk around the mall, there wasnt a whole lot of interest inside but on the top floor there was a Maidreamin cafe, now this isnt the first one ive come across, but the rest are usually on their own entire floors in 8 floor buildings, so they arent really the sort of thing you get to see inside of, this one on the other hand is just a ‘small’ cafe inside a shopping mall, with only a few fences and props hiding the girls. Took a sneaky photo or two, there are a LOT of girls here, holy shit. Like there was only about 10 tables and about 10 girls all dressed up, I dont know the procedure but I didnt think each table got their own girl. The maid outfit they wear is incredibly cute, even down to small details like socks and their bag, one of the girls had an eyepatch though, im not entirely sure if thats a fetish thing or she has actually had some sort of eye surgery *shrug*. 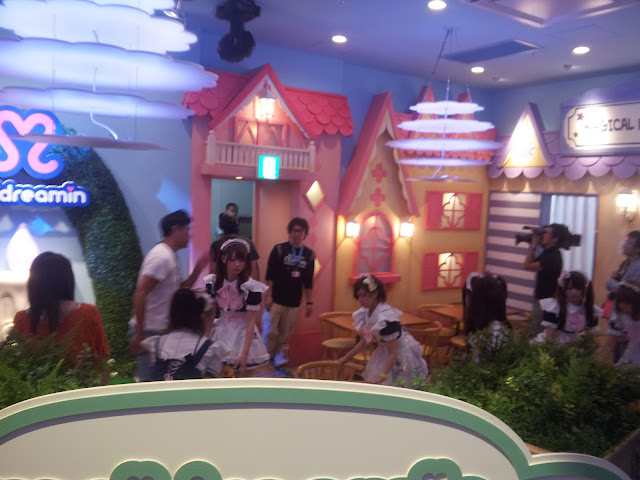 Also in the mall was an arcade… and it was surprisingly up to date, moreso than the ones in akihabara infact, with an Operation ghost cab (the sequel to my personal old favorite lightgun game, Ghost Squad) and, more importantly…. Gunslinger Stratos.
Holy fuck this game.
This fucking game.
I believe I have talked about it before with some of you, but it is an online/local 4v4 team shooting game, played like Gunz Online or I guess a deathmatch version of Monday Night Combat (it is a 3rd person shooter deathmatch game), the main difference however is that the game is played with 2 lightguns, both with analogue sticks, a jump button, and magnetic strips on the guns for ‘switching’ weapons.
So for example, the game starts, you strafe left with Left analogue stick on your left lightgun, you empty your dual pistol clips, and then you put your right lightgun on top of your left one, the gun locks ontop of the other and your ingame weapon is now a rifle, you take your right gun and put it beside your left, and the guns lock and ingame becomes a shotgun… All this done whilst jumping around, airdodging, and shooting enemies.
You select characters at the start, and each chara has different weapons too, I played twice and got a girl with an uzi/flamethrower,shotgun,RPG and then again and picked a dude with dual pistols,assault rifle,shotgun. Other charas get giant lazers, sniper rifles, dual shotguns, swords, shields, grappling moves… all sorts. All in all, this was probably the most badass arcade machine ive ever played (though not the most fun one…..) 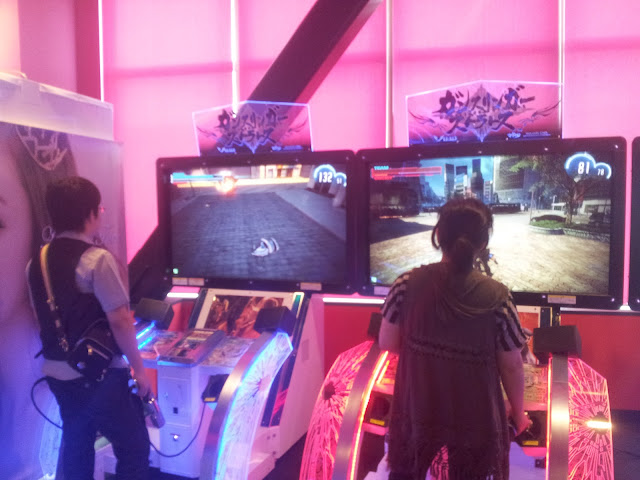 We exited the mall and kept walking along the pathway towards a giant ferris wheel we could see in the background. This lead us to another mall (because Japan.), this one was called Pallette town and featured a car showroom thing, a hello kitty world, another arcade, and a bunch of petshops – this is the only mall ive seen where you’re allowed to bring pets in, and it shows, as designer pets were everywhere, with their owners shopping amongst the many petshops here – dog pushchairs and dog clothing was a normal sight by the end of the hour.
The arcade had a fully encaged machine with a table tennis style table thing, we gave it a try, the ‘manic mode’ proved to be exactly that, it starts up giving you a little warm up, shooting table tennis balls out which you have to return – aiming for targets for points, after 30 seconds the timer refills and the machine goes all out on, throwing out as many balls as it can for 2 minutes. It was so much fun, ive never played table tennis before because I suck at controlling my strength, but hitting a moving target? So awesome, and gets awarded with the most fun game i’ve played in an arcade. 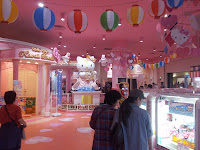 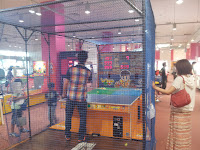 We passed by ‘Zepp tokyo’ on the way to the station, a venue of some sorts, turns out ‘vamps’ is playing today, and as such there were a fuckload of goths around (turns out Vamps is a heavy metal japanese duo). 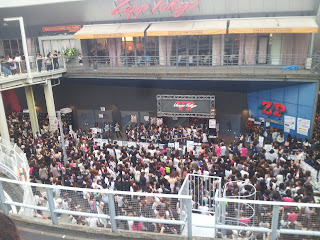 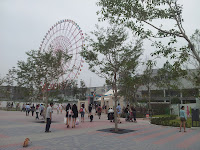 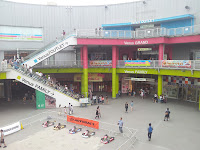 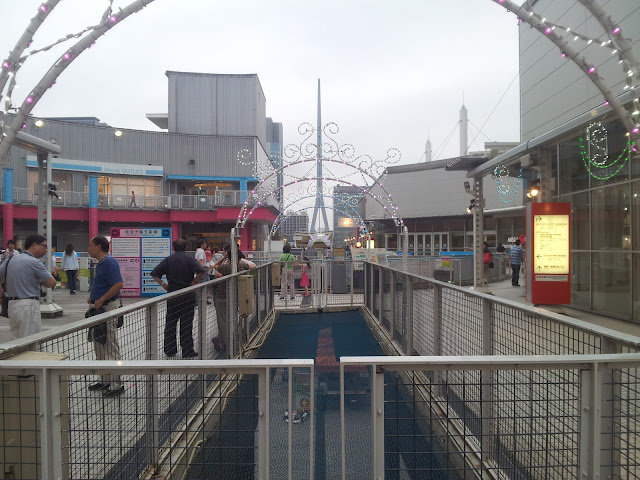 Headed back to Ikebukuro to find dinner, where after a few laps of the place, we settled on a Yakitori place, a costly meal, but a good one for our farewell dinner. They brought over a burning grill and lots of meat (including various cuts of beef, pork, chicken, squid, some veg), and we grilled it and it was fucking tasty. 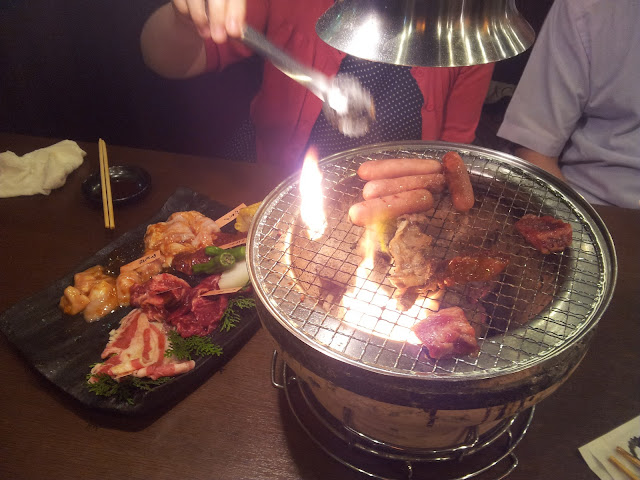 The parents headed home and me and Gavin (brother) went for one last trip to the arcade, to play our hearts out before we head home – Reflec beat, jubeat, Drummania GX3 (my god so many fucking buttons – 3 hi-hats, 4 pads, 2 pedals), I really sucked at Drummania, then again im only used to the old version, not this new extreme version with double the buttons.
Back home at around 11:30pm, and now typing this before I start to pack, and we have a lot of pack…

Flying back tomorrow in the morning, and the long flight means I’ll be back Monday evening UK time. Hopefully then I can start to upload some of my photos and will go back and clean up the blog posts to make sure everything is readable (because I’m sure there are a ton of spelling/word errors)
Thanks for reading, at least this blog will always be here for my holiday posts eh? 😀