I dont even know where to start with how satisfying this game is. This post is a VERY SHORT look at the game, from an early impression.

The world:
Is beautiful, vivid, and begging to be explored. If you ever played assassins creed and felt yourself wanting to climb up the guard posts to synchronize you will have a goddamn field day in guild wars 2 where you can spend hours just exploring the world, finding viewpoints, doing world puzzles and so on. I have spent about 10 hours playing, and i feel like I have just scratched the surface, my world explore % is at about 8% now, the zones are so massive its awesome. 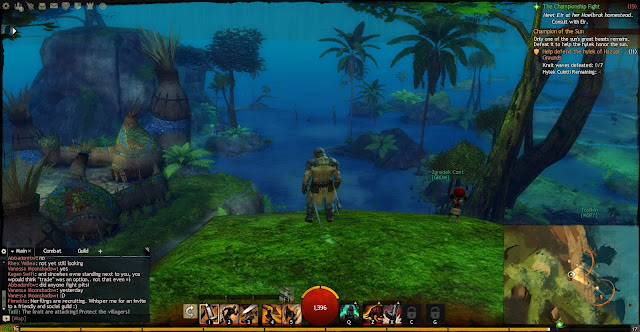 The Combat:
Is mmo combat, they have tried their best to make it more action based, and to some extent they have done so, its not quite on the same level as Age of Conan, but the active dodge system and active skills with fast cooldowns are a little more exciting than the combat in WoW for example. 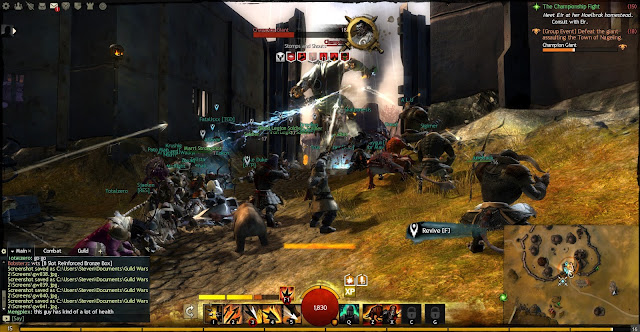 The PVP:
World vs World vs World is pretty much as cool as it sounds, 40v40 battlegrounds are so last season, a bigass world where you can be in a small or large group and rock objectives is awesome, there are always people around, and the fights are crazy. Servers will protect their castles when they come under attack, and will go on the offensive to take castles/supply depots when they have enough people. You also gain exp, money and even drops from fighting in PVP, and its a reasonable amount too. I have no doubt that there will be level 80’s who level purely from fighting in WvWvW.

The ‘Story’ :
Its an mmo, yet it has a singleplayer style story and narrative – the quests are pretty optional as far as i know, but its a nice touch. Maybe you arent massive on the whole teamwork thing, no problem, solo the game and pretend its a singleplayer game.

Game mechanics:
The game really did a few mechanics right, for example, there is no killstealing or loot stealing, if you are soloing a mob and then 8 dudes come over and kill it, you all get xp and loot, everyone wins.
This little change in mechanics means everyone is now on the same team, if you all help each other out, everyone gets more xp and drops, lets form an impromptu party and slay everything! – this is much easier than forming an actual party, requires no talk between players, and has no commitment. Awesome. The same goes for skill bosses, special elites which when defeated, give a skill point, everyone that participates will get the point, and the mob is generally too hard to kill alone, so help each other out!
I really like the random event system they have going as well, a particular example which sticks out is bears randomly coming out of the forest to attack a town that I was in, whilst I was using a vendor. All nearby players are informed of the event, so help is usually quick to come.

tldr: Get the game and come and fucking play with me, my playername is Mengplex