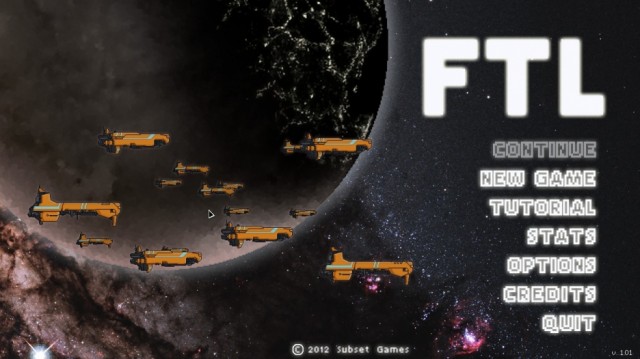 FTL is an odd game, introduced to me by pyrion flax from le youtubes, whose video review is probably better than the mini-review im about to write.

Your ultimate goal in the game is to journey from Sector 1 to Sector 8,and kill the enemy mothership – easier said than done because you are constantly being chased by ‘the empire’  and the final enemy mothership is a cheating bastard and you need a crap-ton of space-xp to even stand a chance.

The game is a roguelike, which is a fancy way of saying 1 life/perma death – Stressful for obvious reasons, which is made more stressful by the general difficulty of the game, where random ships in space will happily carve you up, set your medbay on fire, board you and rape your crew.
Sometimes you’ll die not even to other ships but just by the world itself, run out of fuel? you die. Run into an Ion storm unprepared? you probably die. Randomly get boarded by 4 mantis troops? You die. Starting to see a trend here?

Actual gameplay itself is fairly simply, float along to sector 8, try to get as much scrap as you can so you can upgrade your ship, this can be done by killing other ships, or random encounters in space (helping people, distress signals, mercenary work). Then spend your scrap on stuff at space-shops, where you can buy new bays (giving access to drones, cloaking, boarding) or new weapons/drones (lazers, missiles, boarding drones, defense drones, sentries).
Combat itself is mostly just firing onto the enemy shields, and then going for their weapons bay, the problem occurs however when your ship is underequipped – and by that i mean some combination of…
A) You do not have enough damage to get through their shields
B) Your shields are not strong enough
C) You are being boarded and your crew is getting slaughtered
D) Your ship does not have enough energy
Option B is most common, with enemy weaponry damaging your bays, when a bay is damaged it does not work, meaning you now have to direct your crew to fix stuff, put out fires, or fight boarders. Remember that you can’t attack if your weapons bay is damaged, and you have no shields if your shield bay is damaged.
If you are having option D, then you now have to reroute power to the areas which need it most…. do you want oxygen, or do you want weapons? Tough choice? but if you don’t kill the enemy ship, they’ll eventually tear through your hull and you die anyway.
You can also manually control the doors to vacumn out fires and things like that, assuming your door controls are working. 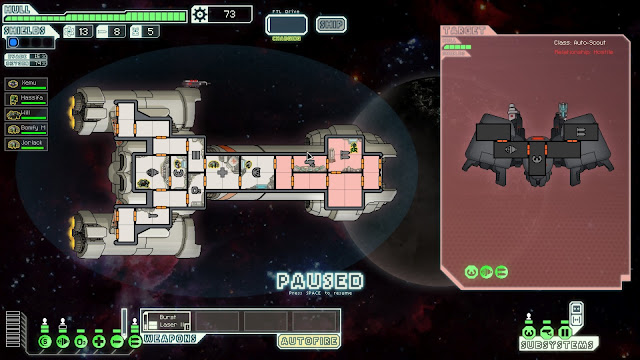 Now im probably not really selling the game too well here, but it is strangely fun and will sap hours away from you, and you wont really understand why or how you are still playing, or why you are restarting the game again. There is a fair bit of re-playability, with various achievements and 8 ships to unlock, so there is always that
I’d definitely recommend it, the game itself is only £7 at the moment on steam, I bought it the other day and have clocked 8 hours already, and at £1/hour it’s already cheaper than half the xbox experiences you’ll have.