A fairly out of nowhere indie game which has taken many by surprise. 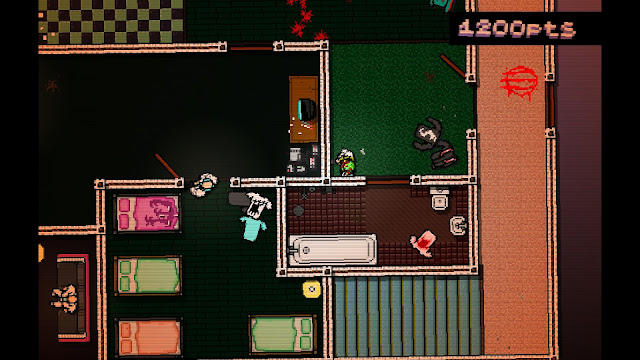 It caught my eye when I saw it at the eurogamer expo this year, and a week or so ago I finally managed to have some time with it (and finished it today)

Its a fun little game, with simple graphics and concept – the concept being ‘kill everything’, which in itself is probably not a particularly unique concept, but the way in which it is carried out is certainly different and hasn’t been done much.
It plays from a top-down view, and is a little similar to counterstrike2D (if you were old school enough for that), that is to say you aim with the mouse and move your character with WASD. The enemy AI is predictable enough, but this is probably part of the game, as if they were any smarter the player would be completely fucked in most scenarios – as is most enemies are professional sharpshooters and musclemen who will murder you in 1 hit.

The story is sort of complex in a way where most players will not have a clue what the ending is or indeed what they have just spent the past few hours witnessing, this isn’t really helped by a final 4 chapters after you beat the game telling the story from an alternate universe or a different perspective or SOMETHING (i dont even know). I personally had a little google and saw some theories for the story of the game, all of which make more sense than my own – jist of which is that the dude is batshit insane.

The music is probably the standout in the game, and really brings it all together. Loud chiptune tracks which will get your heart going and have you charging into rooms full of armed thugs whilst you yourself are armed with nowt but a metal pole and a giraffe mask.

The game is £7 on steam currently, this is personally probably slightly more than i’d want to pay for the game given the short length of the story and repetitive nature of the game, however there are certainly far worse things you could spend £7 on. I’d price it at £5, a figure almost guaranteed to be offered come Christmas time.