Inspired by how terrible my friends are, I thought i’d give a basic overview of how to play League of Legends at a basic level – I like to think that even if you are terrible at the game, knowing some basic stuff will keep you from being a complete bottom tier feeder. 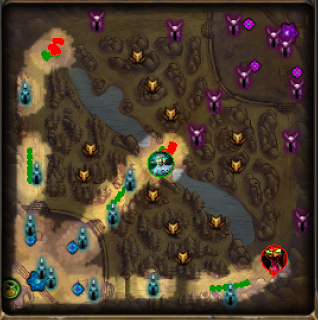 So how do you kill the other team? Multiple methods, or some combination of them:
– Skill Advantage/ Outplay them
— You’ll have to know how your champion plays, and how theirs plays, dodge their skills or make them waste their cooldowns
– Gold advantage / Outgear them
— Have more gold by finishing off the minions/creeps or by having more champion kills, then use this gold to buy items to gain an advantage over the enemy (either by increasing your damage, durability or utility)
– Level advantage / Outlevel them
— Stay in the lane and near dying minions to get experience, Alternatively if you gain enough of an advantage, you can ‘zone’ them (ie. scare them away so much that they cant even stay in experience range of the dying minions)
– Numbers advantage / Outnumber them with champions (ganks)
— Call for help from another lane, or make them unaware that they are at a numbers disadvantage (can be done via bush or flanking)
– Vision Advantage / Superior Positioning
— First strike / Keep yourself in their fog of war whilst maintaining vision of them, means they wont be able to fight back efficiently.

Know your role:
Champions are roughly divided into damage type, role, and style

Role:
AD Carry – Very reliant on autoattacks, almost always ranged because its safer, needs gold to be effective, but when they get enough gold them can ‘carry’ the team. Usually go bottom lane with support
Mage – AP users which can do burst damage, control spells (CC) or other utility. Requires levels to be effective, usually go mid lane because its safest, and it allows them to assist other lanes by ganking (numbers advantage)
Support – Usually AP users, but primarily build supportive items with active effects or auras to aid allies, often have utility/control spells. Supports typically do not need much gold to scale well, and rely on spell base damages or the utility on their spells to be useful.
Tank – Usually build some AP, but primarily will build defensive items (Health/Armor/Magic Resist – aka. HP/Armor/MR). Their role is for the enemy team to waste time attacking them, wasting their cooldowns, or keeping high priority targets out of the fight
Bruiser/Fighter – Some combination of Tank and AD carry, provide backup for the mage/carry and/or lead the charge. Their job is to keep the enemy ADC/Mage busy, or keep our team’s ADC/Mage safe
Assassins – Get in, murder someone, get out. Can be AD or AP, usually have a lot of burst and some mobility to let them do their job.

Lanes/Meta:
Bottom lane (Bot): Usually consists of AD carry and a Support, with the support giving up their minions to the ADC to let them reach their lategame item build faster
Mid Lane (Mid): Usually a Mage or Assassin, Mid lane lets them farm safer and duel the opponent 1v1, it also allows for easier ganks and roaming
Top Lane (Top): Typically a Bruiser, but Mages, tanks and assassins are not uncommon, the top lane is longest and typically isolated from the rest of the map (as bot/mid/jungle will fight over dragon – which spawns inbetween bot and mid lanes). The top laner thus has to be able to hold their own in 1v1 or 1v2 situations, which is why they are typically a bruiser.
Jungle: Roams around the jungle (wooded area between the lanes) and kills the neutral monsters there, this gives an exp/gold advantage to the team as you can have 2 solo lanes. The jungler will also typically try to gank lanes where possible. Junglers are often tanks or bruisers as other roles have difficulty sustaining their health (as the jungle monsters will be targetting you, as opposed to minions which kill each other)

Cookie Cutter Builds:
So you have gold for items, but arent sure what to buy? Here are some items that are useful in 95% of scenarios. Build them in the order shown if you don’t know any better.
If you don’t know what to buy first item, Buy Boots are 3 health potions. Safe in every situation.

If ever in doubt, buy a warmogs.

Any other questions about the game, comment and maybe i’ll make more tutorial posts.