So, after the shitstorm on review websites (http://www.metacritic.com/game/pc/aliens-colonial-marines) I was encouraged to download Aliens Colonial Marines to give my opinion of it.
So here it is.

Now right off the bat, im going to go ahead and say that I did skim-read the eurogamer review, so I was expecting certain things before I went in – Im also going to go ahead and say that I dont think i’ve actually watched the Aliens films, so any attempts at “look! its like that bit in the film!” were completely shrugged off. I suppose maybe this makes it a more unbiased review? Or maybe it just makes it a review by someone that doesn’t ‘get it’.

So game starts up, I find out its running in 720p with settings turned down, ok no problem, not every game has to include auto detect settings, thats fine. I crank it to max and get going. 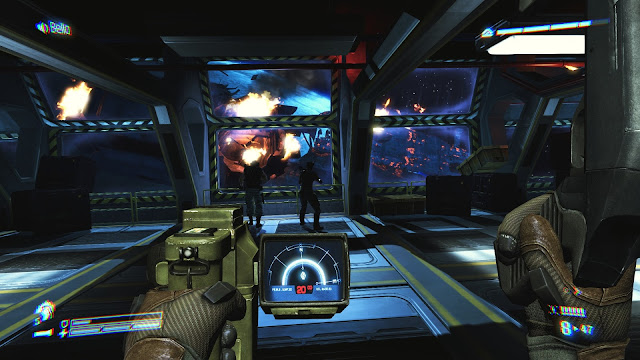 The game introduces its basic mechanics and stuff, and eventually we get to the first alien encounter – The game is actually pretty good at this point, If there were a graph of my review score over time, we’re sitting at a [85] still – The buildup is good, tense music, the movement scanner blip saying something is ahead but I cant see it, the enviroment is dark, it kind of feels like a horror game.
I’ve heard some complain about the graphics in this game, and tbh im not seeing it – maybe these are console players or what but graphically I thought the game was good enough, with dynamic shadows, a smooth framerate and quite a nice HUD style (I quite like the pseudo helmet LCD stuff). [90]I also quite like the health style, a half/half between the common regenerating health of now, and the health of the 90’s which actually had some worth to it. 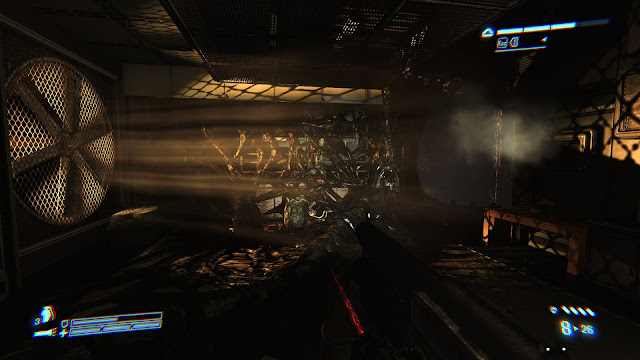 The alien appears, swipes at me a few times and then runs off to hide (we’re up to a [95] now maybe), I cant find it, I can hear it – which is probably more terrifying, and then suddenly…. It all goes to shit. The alien gets stuck on the scenery and stares at me, stuck in a prowl animation.
[65]What a shame, oh well, I kill it and move on.

The aliens multiply and are coming in waves now, they have somehow list the same intensity as the last one, briskly jogging towards me in a straight line down a long reasonably lit corridor, some shitty music stirs up – Im not sure if this is music taken from the film or not, but it really does not fit the mood at all, its neither action/battle music or atmospheric/tense music.
There is a ‘defend the point’ section, where you fend off a horde of aliens, the AI demonstrate the incompetency mentioned in the eurogamer review, firing wildly at boxes in front of aliens and getting mauled from behind whilst I prop myself against the back wall to avoid getting flanked. The aliens have gone from being hunters to cannon fodder as I exterminate them by the tens [50] 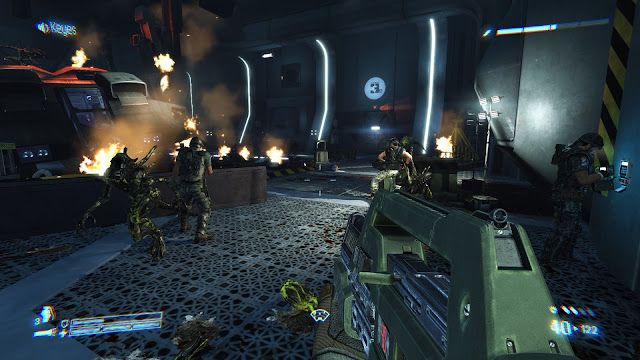 I’d now like to present probably my biggest gripe with the game – After an hour or so of shooting things, you begin to realise how fucking terrible the shooting system actually is. The guns shoot more or less true with hip fire, yet seem to spread whilst aiming down the sights – this is coupled with the gunsight shaking wildly whilst firing, yet not really moving the screen – the effect of this is imagine a RDS, then when you start shooting the RDS starts flailing around the screen, this makes it pretty much impossible to adjust aim whilst shooting because you aren’t actually sure where you’re actually aiming whilst the ‘recoil’ settles down. I’m also going to go ahead and say that the gunfire noise coming from the default gun (pulse rifle I think) is the worst fucking noise to ever come from my speakers – Its not even a describable noise its just fucking horrible and almost like unleashing a barrage of farts with every mouseclick (and not even consistent farts either because the sound would cut and restart mid stream of full auto, almost like they only recorded full auto to last for 2 seconds and then just loop it). [35]

The game also features a level up system and weapon modification system, obviously trying its hardest to appeal to the call of duty generation

So of course you can equip your guns with a reflex sight, and put gold camo on your pistol, hell in the short period I played I had a lovely red camo with a skull on my assault rifle – perfect for my jumping 360 headshots.

After the first level ended I further understood the hate for the game, we were now fighting solders with guns – the game rapidly went from ‘Badly made interesting game’ to ‘Badly made outdated game’ – footsolders by the dozen, even some armoured ones in there too to ‘mix it up’, we’ll call them juggernauts while we’re at it I guess. The shoddy AI which plagued my teammates also applied to the enemy soldiers of course, a lovely mix of ‘run in a straight line’ and ‘whack-a-mole’ behind cover bullshittery. [??] 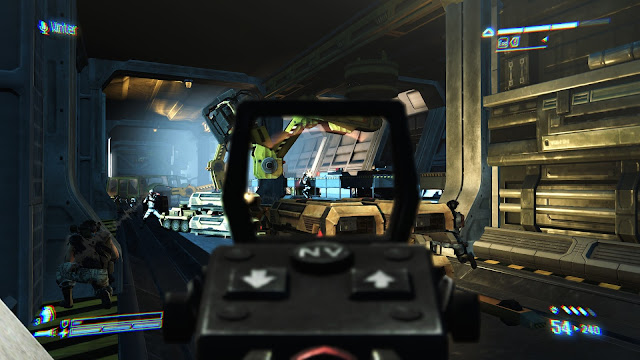 The game seems fond of its random explosions as well, at no less than 4 times in the short time I played, I died to explosions – from where? from who? I’ve no idea. Maybe the enemies throw grenades, maybe I was hiding behind red barrels – genuinely no idea.
Another minor thing, the game didn’t teach me how to change weapons, I had unlocked 5 other guns during my playtime and the game didn’t feel like saying ‘Press B to open up weapon change’, nothing, I found out after 2 hours of play that I had a sticky grenade launcher and 70 grenades along with a bunch of other goodies. []

Verdict:
Aliens CM starts as a bunch of interesting ideas horribly implemented before going full retard and turning into Call of Duty in space (only without the satisfying gunplay, interesting environments and drama). The first 20 minutes or so makes me really wish this game was made more into a horror game similar to Dead space – but for it to do that, may as well just give the whole fucking thing to Visceral games. Aliens CM is a true horror for all the wrong reasons, plagued with shitty aiming and horrible SFX and music.
My favourite part of the game?