So Tomb Raider is a game i’ve been looking forward to since I played it at the Eurogamer expo mid 2012, the demo I played put heavy emphasis on the survival aspect of the game, hunting and foraging for food and find a safe place to sleep. I kind of expected the main game to have a little more of this style of gameplay, however in the full game, literally straight after where the eurogamer demo ends, is where the hunting/survival aspect ends, There is no need to aim at an animal, find food, or visit a campsite for the rest of the game, which felt like somewhat of a wasted opportunity – but at the same time perhaps I would complain about it if it were the other way round.

The game mechanically is divided into 2 core parts, shooting and platforming – the former being a VERY typical current generation shootout in an enviroment filled with chesthigh walls and corners for you to take cover behind, the game at least attempts to spice things up towards the later half of the game by having enemies fire napalm and dynamite at you to try and keep you from sitting behind the same wall for the entire gunfight. The gunplay feels fairly solid, with shots feeling powerful and mostly satisfying, recoil is present and not too excessive and magazine sizes and reload times feel about right, the game also lets you take advantage of the environment for kills, for example shooting people sliding on a zipline will make them fall to their death, or a shotgun blast can knock an enemy off a cliff for an easy kill. Stealth can play a fair part in fight initiation – your instinct vision can show enemies able to be picked off who wont alert others of their death, and bow headshots provide silent ranged kills, this kind of stealth gameplay is never actually forced however and is purely up to player choice. 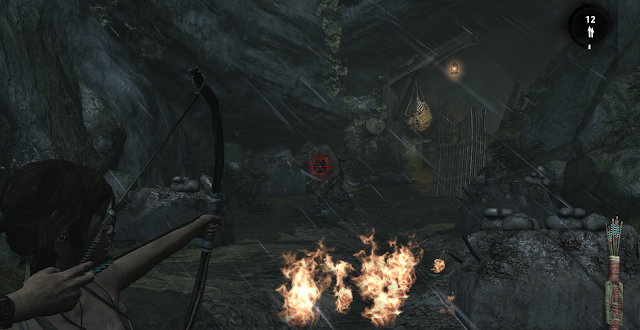 The platforming side of the game has you traversing the parkour playground that is the island, the world starts off fairly calm with forest and cave environments – before scaling up to suspended craziness, massive vertically scaling shanty towns and mountain ranges. The world is of course littered with collectibles, secrets and optional ‘tombs’ – the tombs play a minor part in this game (despite being called Tomb Raider) and comprise an environmental puzzle followed by an ancient treasure chest containing a weapon upgrade (because video game logic), the puzzles presented, whilst short, are usually pretty clever and will require a little thought to be completed, its a shame there aren’t more of these tombs or that they aren’t more of a core part of the game. 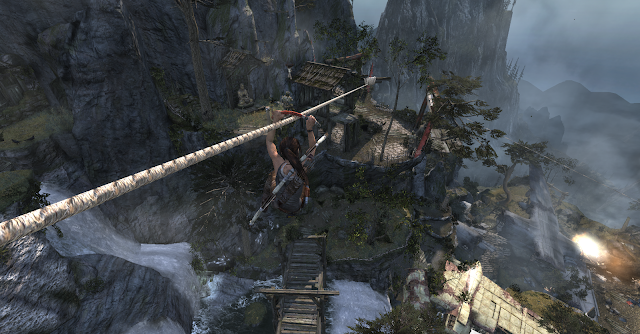 Graphically this game is fantastic, playing on PC with most settings maxxed the island looks stunning with lighting effects, fog, and massive draw distance giving the world some actual size and weight – which is always a good thing when half of your game is based upon moving through the world and exploration. The camerawork/direction is also very well done, with a dynamic and cinematic camera shots being used as you play to further help accentuate the world that crystal dynamics have so lovingly created. Im not much of one for spectating single player games, but I imagine watching someone play some of the platforming/chase sections would look like a movie in progress. (All screenshots taken in this blog post were ingame playable sequences) 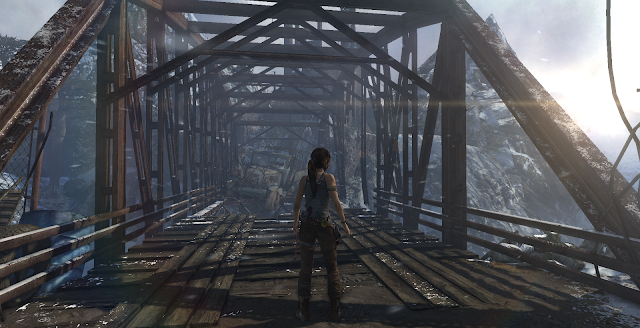 One of the minor gripes I have with the game is specifically pertaining to the slightly volatility of the PC version (which I hear other people have been having more trouble with, it ran mostly fine for me with the exception of this one bug). The quicktime events on the PC version are fucked, there is simply not enough of a visual cue to let you know what button you are supposed to be pressing, the action is centered in the middle of the screen and presented beautifully, yet the icons which appear on screen is seem to have no clear indication of what I should be pressing – only by looking at the very bottom of the screen will it say ‘MASH E’ or ‘PRESS F’ , the problem with this is that the quicktime events need to be timed well, press too early and you fail, press too late and you fail – hence quicktimes end up with you staring at the bottom of the screen and flopping your head up and down to try and match the buttons to the cutscene. I died to certain cutscenes multiple times just because of dumb shit like this.
Oh also, there is a bug where in certain events (like the one below) the game will not tell you what button to use at all – I had to enlist the help of my friend twice to find out how to use rope arrows or use the rope ascender purely because it wouldn’t let me progress until I used the new item I had just found , and yet refused to tell me how the fuck to use it.

Verdict:
Tomb raider is a very solid action/platformer game, and lasts about 6-12 hours for the main sgame. It features a fair storyline, great graphics and good mechanics. It is defo worth a play, probably worth whatever they want in the shops, and will likely find its way into the bottom half of my ‘Best of 2013’ at this rate.

Oh, I couldnt end this review without using this picture. 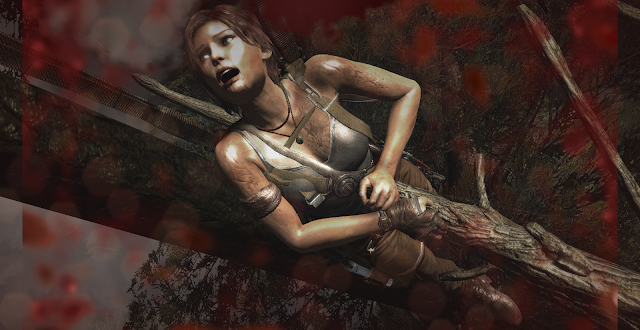