Sniper Ghost Warrior 2 is a sequel to the fucking abysmal ‘Sniper Ghost Warrior’ which came out in 2010. I was initially pretty excited for the first game as I love the concept of sniping, however that game was plagued with horrific design choices – Safe to say then that I was expecting the sequel to be a  complete pile of shit as well, which is thankfully not the case. 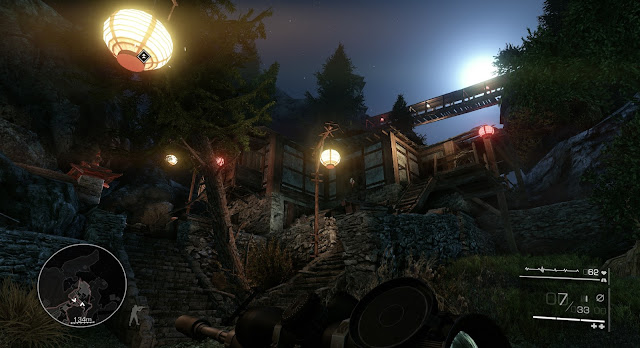 The game is roughly divided into Stealth, Skirmish and Overwatch;
Stealth: Obviously they couldn’t make a FPS where you don’t move at all, as such you will have to relocate between segments. The game has some ‘forced’ stealth bits where you will need to actually concentrate on being unseen and silent, and then the ‘you should probably be quiet about this’ bits whereupon  the game becomes more difficult if you fail. I verymuch appreciate that the game doesnt gameover upon being found, ever – I’d rather be outgunned like crazy than forced to restart.
Skirmish: The skirmish segments are small scale sniping bits, usually a small outpost with 3-8 guys that you will need to take out prefably in an order where they wont notice each other dying. This makes up the core of the game, and is usually pretty fun.
Overwatch: These segments are the super long distance sniping bits, possibly providing cover, or having a sniper battle with a boss. These bits are the most fun as I believe the primary fun factor in this game is the satisfaction of landing a 1000m shot to the face after judging bullet drop and wind.

The game starts VERY strong, I thoroughly enjoyed the first act and was excited for the rest of the game, the first act is set in a jungle/farcry paradise area and is filled with long distance sniping sections. Sadly the game goes downhill after Act1, with Act2 borderline turning into Call of Duty style run and gun quickscoping in an urban area. Act3 brings it back somewhat, being set in tibet and with a fair mix of close and long range fighting.

Sniper GW2 looks gorgeous thanks mostly to being on Cryengine 3, some lovely lighting and shadow effects make the world look lush and colourful and provides the long draw distance required for this genre of game. Sniping is satisfying, and the AI is tolerable now compared to the original Sniper GW and is arguably better than the AI in Sniper Elite V2 – What I mean by this is they do not automatically all alert and know exactly where you area and shoot you from 1000m with crazy accuracy when you miss a shot.

The game HAS TO BE PLAYED ON EXPERT for any satisfaction to be had, this is the only mode which removes the red dot indicating where the bullet will actually hit (which I imagine would take away most of the fun to be had from bullet drop gauging), however playing on expert results in other problems, in particular difficulty in seeing enemies or objectives due to lack of hints – on multiple occasions my spotter would say “hit the bell to distract them!” and I would spend the next 5 minutes searching the area for a bell hiding in the distance (I presume the bell would be highlighted or something on normal), similarly it can be very difficult to find enemies in areas where you are not provided the thermal goggles (they are swapped for NVG on certain levels), apparently on normal the enemies are highlighted on radar or in some other way but on expert look forward to spending 3 minutes to find an enemy sniper (not to mention there is no lens shine or tracers from enemies)

The Verdict:
Sniper Ghost Warrior 2 is the most enjoyable sniping game yet, whilst it lacks the ‘OHHHH’ factor that Sniper Elite V2 provided, it has a more fun AI and great sound and visuals. Be aware however that the only difficulty worth playing is Expert, and that the game lasted me 4hrs 19mins and there isn’t much replay value until some inevitable DLC comes out or something.
If you can pick it up on the cheap, or if blockbusters is still a thing somewhere I would recommend giving it a try, or if you don’t want to buy it, its defo worth a download.