I remember when I was young, around 1998 (which would have made me around 9 or 10) I would need to go to work with my father sometimes as there was nobody at home, My dad is an accountant, and let me assure you, there is fuck all for entertainment in an office other than paper, pens and thankfully, computers.

I had an old PC games magazine demo disk, I only really remember 2 games that were on the disk – ‘Baldurs Gate’, which would go on to become somewhat of a PC gaming bioware classic (The same people that now make Dragon Age, Mass Effect and KOTOR), and ‘Commandos’, which – in retrospect, is a fucking absurd game for a 9 or 10 year old to be playing. 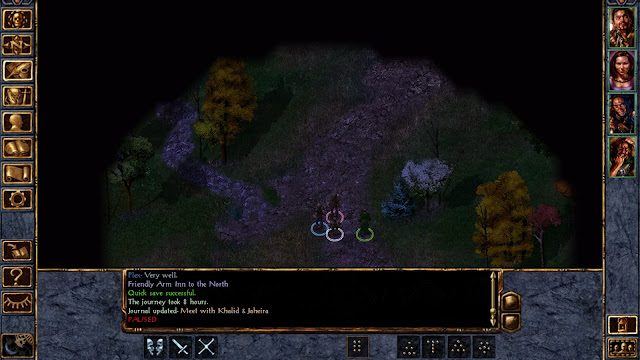 It was no surprise then, that I hold fond memories of both games to this day, even though, when I think about it, I made little to no progress in either of them. My memories of Baldurs Gate consist of (and this will be hilarious to anyone that has ever actually played Baldurs Gate) getting to the inn at the start of the game [Which you spawn outside of] and then trying to burgle the place, getting caught, and then dying to a watchman, I think once, I maybe actually made it out of the city and partied up with the girl, thief and necromancer, however I am 100% sure, I never saw the Friendly Arm Inn.
Im playing through Baldurs Gate enhanced edition, and the first 5 minutes of the game are a complete nostalgia trip – because the starting area is the only bit of the fucking game that I know, Im pretty sure 10 year old me didn’t know how to save the game, or equip items/weapons (because even today, as a grown ass 24 year old, that shit is complicated as fuck to figure out).

I don’t even want to try installing commandos, because I can already tell im not going to be able to beat the first level. Those older style games are so ridiculously difficult that playing it today will only make me realise what a crazy child I must have been – but then hey, I guess these things build character.