I was thoroughly enjoying Bioshock Infinite, then it ended.

Lets take a few steps back first though.
I remember the first time I played the original Bioshock, I enjoyed that game, however something about it made that game left what could only be described as a really bad aftertaste.
I skipped Bioshock 2 after half an hour or so of play because I simply didnt enjoy it.
So along comes Bioshock Infinite, a game which I initially had no interest for, my interest was perked however after hearing a friend’s thoughts on the game, which was swiftly followed by a metacritic score of 96.
The first thing I have to say about the game, is that its gorgeous.
Columbia is a bright and colourful place filled with interesting and unique locations and crazy weather which makes exploring and progressing through the game a joy, even most of the indoor sections are brighter and feature more variety in styles than similar games in this genre.

On multiple occasions (particularly in the first 1/3 of the game) I found myself frequently taking breaks from combat to admire the scenery. Changes in time and weather further add to eyecandy, along with the special attention which has been given to lighting effects – the shadowing, bloom, and glow from lights really adds to the overall atmosphere of the game. 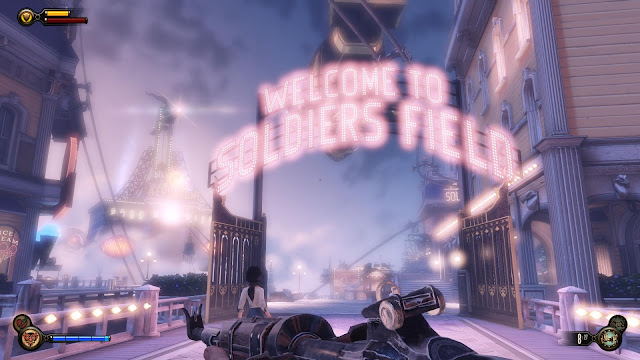 On a very few occasions during the game, the presentation style completely changes, this is a pretty neat effect I havent really seen in games much, and is usually something reserved for films, but I feel Bioshock used the effect well to enhance the atmosphere of an area.
Its worth noting also that the PC version is pretty well optimised, I was able to play on Very high settings at 1080p and maintain 60 fps for most of the game, even on my ageing PC.
The game, functionally, is an FPS with powers, similar to previous games, the gunplay is mostly solid, with majority of the guns feeling impactful (though some balance issues seem to prevent half the available weapons from being used at all unless you fancy seeing yourself outgunned). Aim down the sights is present, as are headshots, heavy armored infantry, and ‘specials’ – the latter two being the replacement for Big Daddies or similar threats.
There are 8 powers in the game, each with their own perks, however they are mostly relegated to utility  effects – I only actually found myself using 3 or 4 more more than a few times (Even though Im playing on PC which gives you easy access to all 8 powers – you have to use a wheel and quickslot system on controlpad). Weapon power, ammo and enemy health are mostly fine until you get towards the end of the game, where enemies begin to turn into bulletsponges and max ammo/found ammo quickly become insufficient.

The game features an almost RPG style random gear system along with options for upgrading powers, weapons and player stats, the gear provides perks whilst playing (for example, faster shield regen, more ammo drops, double damage when critical low health, etc) and are an interesting addition to the game, whilst the weapon and power upgrades are mostly damage upgrades or ammo boosts – its worth pointing out that the price of these gear upgrades are very high compared to the amount of money you will scavenge through the game – likely resulting in you speccing into certain weapons or skills more, this becomes a problem when mixed with the low ammo pickups mentioned earlier, as during intense firefights you will often be forced to pick up whatever weapon you can get your hands on, like a shitpiece you havent been upgrading, which can make certain bossfights very difficult and result in ‘corpse zerging’.
Cute heroine Elizabeth deserves her own paragraph, its a nice change for a pseudo escort character to not die in firefights and actually sort of be an asset to the player, she is pretty much constantly throwing money and salts at you during combat, and is a joy to travel with. From the dance scene near the start of the game, it became clear to me that Lizabeth has been designed to be loved by the player, particularly towards the start of the game, she has many little quirks and interactions with the environment as she explores much the same as you – I was shocked when she sat down to rest on a bench as I was looking at something nearby, or when she waited outside the male restroom for me.

The story…. is trippy. It is a solid story for the most part, and progresses the plot well enough and moves you from location to location, however towards the end I feel like it tried a little bit too hard to replicate something similar to that of the end of Bioshock 1 – Obviously an attempt at making the game deep/twisty, I feel as though it doesn’t explain itself enough and doesn’t make a whole lot of sense.
Many elements in the story are also left unexplained, like the giant mechanical bird or certain enemies (or why the fuck there is so many bottles of ‘salt’ laying around when nobody seems to use vigors but you).
Whilst im complaining about stuff, a design overlook I found at a particular point in the game left me without any ammo, facing a horde of enemies, with nowhere to be able to pick up items and with the respawn being in a dangerous location – I had to corpsezerg into the room, kill a guy with melee, die and repeat about 8 times to clear the area, losing all my money in the process (gotta remember also that enemies regen health when you die).
A similar sort of encounter with a boss in a graveyard had me without ammo facing seemingly endless waves of enemies from all sides, perhaps its because I was playing on hard, but these sections just seemed badly made (artificial difficulty) rather than actually being challenging.
Im almost surprised there is no multiplayer segment in this game, considering Bioshock 2 had multiplayer, and even the recently released Tomb Raider has multiplayer. With the gunplay in infinite being so solid, I feel like DM/TDM would have been pretty fun, particularly with gear/weapons loadouts, limited upgrade points for loadouts, and then putting Vigors (powers) on the map as pseudo powerweapons, and awarding salt for kills and assists…. Maps could also use skylines for movement/flanking or CTF style stuff…. I should work in videogames, someone hire me already.
Verdict:
Bioshock Infinite is an amazing FPS adventure set in an beautiful locale, its small cast of well crafted characters help to pull the game’s complex story together. There were few complaints to be found whilst playing through, and I found myself struggling to pull myself away once the game started moving.
Approximate Game Length :  13.5 Hours on Hard difficulty.
Actual Worth / Shop Price :  £30 / £28 = 1.07
Should you play it : Without a doubt, this is likely the best single player FPS game released this console generation.
Rating: 5/5