The Dead Space series have always been solid action/horror games, the first one in particular was full of memorable moments and the second was impressively scary.
The third seems half and half in a variety of ways, with a handful of highly refined ideas which work well, some other new features which perhaps were not so well thought out, and other aspects of the game which just seem like steps backward for the series. 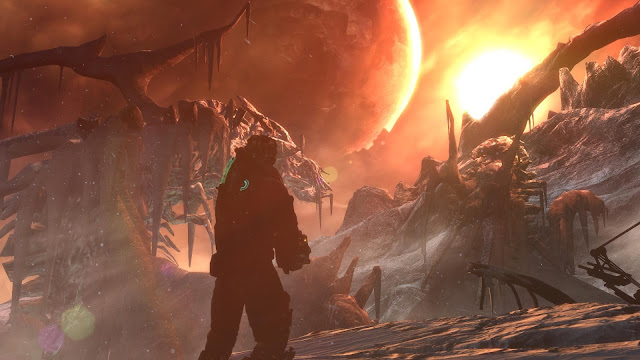 I’ll start with the new features for this game, the first half of DS3 takes place in space as usual, and eventually you unlock a small flying vessel of some description, the game almost goes into a kind of free roam mode for segments, with the ability to choose to backtrack to previous locations, fly out to a derelict ship for an optional mission, another place for a co-op mission, or to simply complete the main objective to advance the story – Im a pretty big fan of ‘do what you want’ style games, so it was nice to sort of be able to choose what my next objective would be, the optional missions reward you with additional resources, weapons and upgrades (which i’ll get to shortly). Unfortunately, very quickly after it is introduced, the flying vessel and any free roam capability is stripped from you, and you’re back to crawling through corridors for another few hours, I cant help but feel this was a waste. 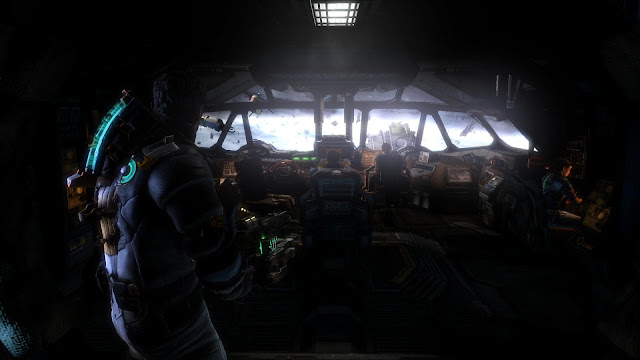 Another new feature, and potentially a game breaking one, is the new weapon system, In previous games you would find weapons similar to Resi (ie. a pistol, a shotgun, rifle), however in DS3 you find weapon parts, or can craft them from found resources. The game has has little limit on when or how you use these parts and so it is all a matter of how fast you can scrape together the resources to build your weapon of choice – its worth noting also that these weapons have 2 slots, essentially allowing for 2 weapons on the same gun frame. Being able to have an assault rifle and shotgun on the same slot is a pretty big firepower advantage over previous games where you would oftentimes find yourself armed with just the welder (and then the line launcher for emergencies), I would say that once I had an AR/Shotgun and a Sniper/RPG, the entire game became almost trivial and monsters became much less of a threat.
Something minor which may not seem like such a big deal (but actually is), is the changing of ammo, imagine if you were playing Resident Evil 1 and you could reload your shotgun using pistol rounds (and still fire shotgun shells), why the fuck would you use the pistol anymore?
This lack of foresight means you always have your strongest weapon available at all times, with little need to ration ammo for it – When playing old school survival horror games I would have the mentality of “I need to keep X shotgun shells on me incase shit gets real”, the ammo change really enforces that this is an Action horror, and definitely NOT a survival horror. 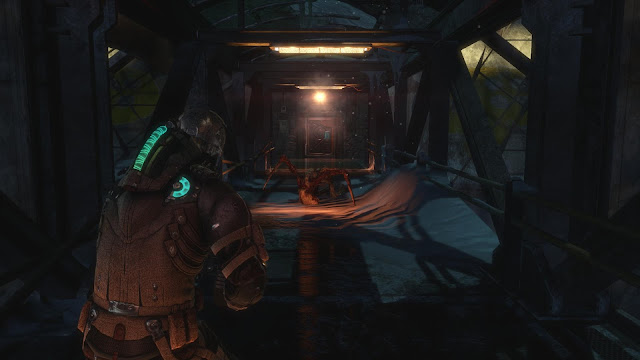 There are a few other new features (or at least, features I don’t recall being in past games),
– Co-op is obviously one of the bigger ones, I didnt get to try co-op but I was mostly glad to see that the game had not been balanced around it (or at least scaled it for me playing alone), there are some obvious tell signs that it has been designed for co-op but the singleplayer experience hasn’t suffered as a result (something which I was worried about when they revealed the feature at E3 2012), there are special co-op only missions, which will likely fully exploit the fact there are two of you, which is probably a good thing.
– There were a few puzzles put in, hacking minigames and so on, these are actually never explained and can take a little while to figure out, some extra effort in the objective of the minigame/puzzle would have been nice, especially since the game seems to give you tutorial hints on just about everything else.
– There are some segments of the game with human enemies, which are about as uninspired as one would expect, the game essentially turns into Gears of War for these bits, but at least they die fast so you can get back to fighting necromorphs.
– When you land on the Ice planet a body temp gauge is introduced, and you have to keep yourself at a reasonable temperature. I quite liked this new challenge mechanic and would have liked to see it used a little more in the game, however the idea seems to get scrapped after about 15 minutes. 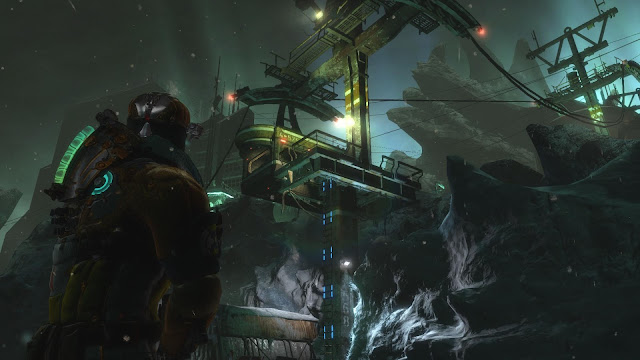 The remainder of the game (read: the established Dead Space gameplay) is all pretty routine, explore spaceships, bases and so on whilst scavenging everything you can find, trying to anticipate which vent the next monster is going to explode out of. DS3 handles these sections well, with some cheap thrills thrown in here and there, some tense sound, and enough monsters to keep you occupied and on your toes. The necromorpsh seem to be shockingly fast now, I like to call them Usain bolt zombies because of how fucking fast they run at you. The game runs well on PC, I ran the game on abs. Max at 1080 and was getting a consistent 120fps (Vsync locks the game at 30, so turn that off as soon as you can), It feels almost a shame they didnt go the extra mile graphically – the game looks fine and all but there was plenty of room for improvement, particularly in texture quality for the PC version. 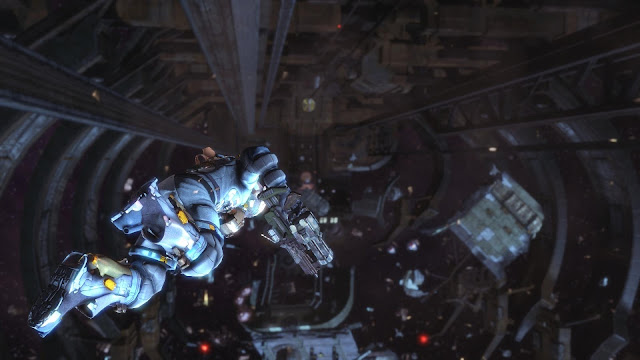 I had a few gripes with the game, there are segments when the objective arrow would just lead you to a corner and not really pinpoint why you are there, only for you to realise you have to complete something else and the objective marker is guiding you to the end point.
I did not enjoy having to jollystomp every motherfucker I killed, along with having to break about 500 boxes, open 300 lockers and so on, Im not entirely sure why you need to overkill the enemies to recover items from them, and in a game filled with enemies, this gets tiring very very quickly.
Also the difficulty of the game seemed…meh. Granted I wasnt playing it on the hardest difficulty but there seemed little challenge aside from some stupid cutscene deaths (soon.).
DS3 also takes a step back from its predecessors in terms of scares and shocks, I feel like the previous games (particularly DS2) were much scarier and more tense, whether this is game is less scary due to the weapon stuff I mentioned earlier, worse designed, or just become routine, im not entirely sure.
Special mention also to ammo scarcity, in the first 3/4 of the game you are swamped in ammo, literally you dont even need to aim properly just spray at stuff, but then in the last hour or two of the game you will find yourself with practically no ammo relative to what the game is throwing at you enemy wise, very odd.
One last gripe, towards the end of the game you have to climb lots of cliffs, and then climb down lots of cliffs. Its really fucking boring, and occasionally frustrating with insta death happening if you get hit by something falling. I died 8 times on one cliff face, Dumb as fuck, and not fun at all.

Verdict:
Dead Space 3 is a competent and refined Action Horror title, however during its evolution it seems to have forgotten what made the previous games so appealing. Both the scares and challenge in DS3 seem to have taken a back seat to what can only be described as a Michael Bay edition of Dead Space filled with explosions and gunfights. DS3 is not bad by any degree, but it feels like a disappointing end to the trilogy.

Approximate Game Length :  10-14 hours depending on optional mission
Actual Worth / Shop Price :  £16 / £25 = 0.64
Should you play it : I would probably actually say no, fans of the series will be disappointed by the gameplay choice devolutions, and people new to the series should probably go and play DS1 and 2 first (which would leave them in group A afterwards anyway)
Rating: 2/5