Monaco : What’s yours is mine

Home » Games » Monaco : What’s yours is mine
Games | Games Review

Monaco was the grand final winner of IGF back in 2010, I actually remember seeing a little bit about this game a year or two back but never really looked much more into it than that, and then suddenly, the game got released, everyone started talking about how great it was, and then silence.
The game is a few weeks old on PC but is set to see another wave of fandom when it releases on XBLA on the 10th of May. 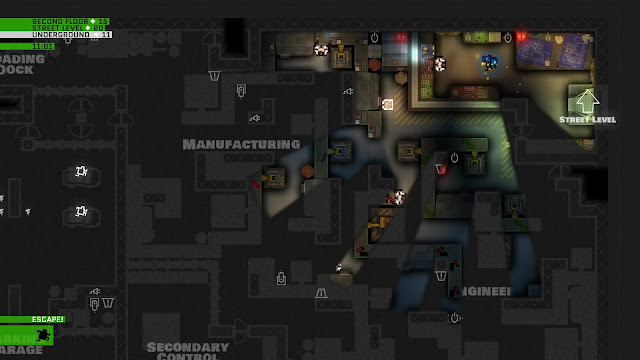 Monaco at its heart is a 2d top down stealth game, it plays a little like a mix between old metal gear solid, and pac man, and its great.
Each mission plays out similarly, infiltrate, complete the objective, and then get out – Players are encouraged to try and play stealthy (especially on the later levels, where the guards are significantly less tolerant of your antics) at all times, using a mix of line of sight stealth, tools, unique character skills and hacking to get past all manner of obstacles like gun turrets, lasers, alarmed doors, patrol dogs, and of course the guards. Performance is judged by time, with penalties incurred for not ‘cleaning out’ the joint – each level is littered with coins and failing to collect them makes your time skyrocket and all your friends will laugh at your incompetency on the online leaderboards.

There are 8 characters to choose from, each with their own unique skills, some are more useful than others but they all have their distinct advantages depending on the level and the players style – in multiplayer getting a good teamcomp can make a heist significantly easier, an option you won’t get whilst playing singleplayer. There are also usable items scattered on the levels, weapons, smokebombs and EMP’s amongst others, which will make life easier. 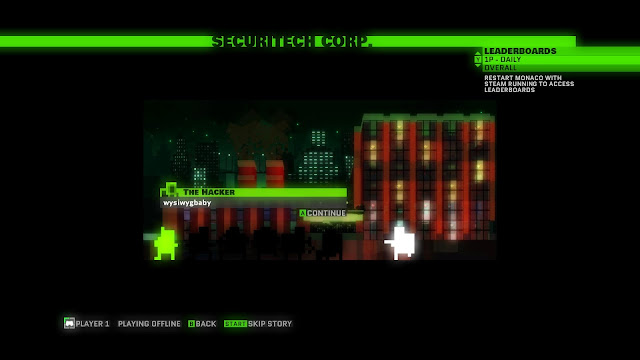 Whilst there is a storyline and cutscenes between levels, it is fairly basic (though some dialogue lines can be entertaining).
There are a fair amount of levels, and then remixed (aka. Hard mode) levels which throw in more security and guards for you to bypass. Along with the leaderboard and achievements, if you have some friends there is some reasonable replayability and lifespan here (assuming you like scoreboarding).

Multiplayer
There is no doubt that this game was made to be played in multiplayer, the levels are massive and the advantages provided by multiple operatives in the field are too good to pass up. With my circle of friends, multiplayer quickly became a romp to try and grab all the coins as fast as possible and zergrush our way to the end of the level, reviving each other along the way and occasionally luring guards away from friends (and other times, leading guards straight into friends).
The game can become rather chaotic at times, particularly when the camera zooms out to accomodate all players if they are on opposite sides of the map, and ‘minor’ details like cameras and laser traps can often go unnoticed when your friend is leading a conga-line of guards towards you.
ps. Local 4 player, thank you pocketwatch games.

Singleplayer
In singleplayer this game becomes significantly more serious, you only get to pick one specialist (and thus only have 1 active skill) and if you die, you have to change character. I found myself almost always using the recon because the ability to see enemies through walls is so very useful (otherwise you have to rely entirely on line of sight – making it even harder than playing MGS without the radar).
The game in general becomes much much harder, some coins are near impossible to get to without careful planning and execution and getting caught is much more tense (unlike in multiplayer, where there almost always seemed to be someone getting chased around). 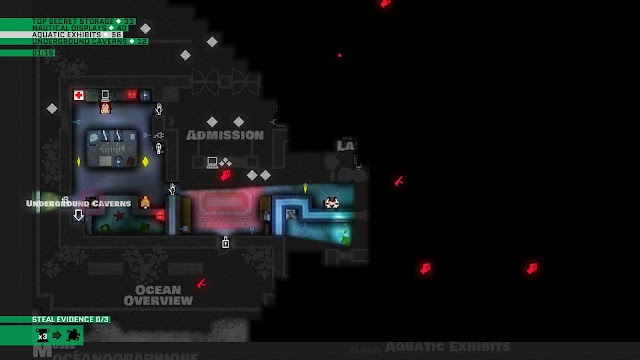 Verdict:
In multiplayer, Monaco is a fun and frantic twist on pacman, and in singleplayer, Monaco is a brilliantly structured stealth game with a slightly insane difficulty ramp. Regardless of how you choose to play it, Monaco is a charming, fun and unique game which deserves your attention. Should you be lucky enough to have 3 friends to play it with locally you’d be a fool not to buy this game at the price it is.