Call of Juarez: Gunslinger is the 4th game in the CoJ franchise, it is a series I’ve personally never had problems with, however I did completely skip ‘The Cartel’ because of the reviews surrounding it.
The game is developed by Polish games studio ‘Techland’, who also make the Dead Island series – but aren’t known for producing anything else worth commenting on. 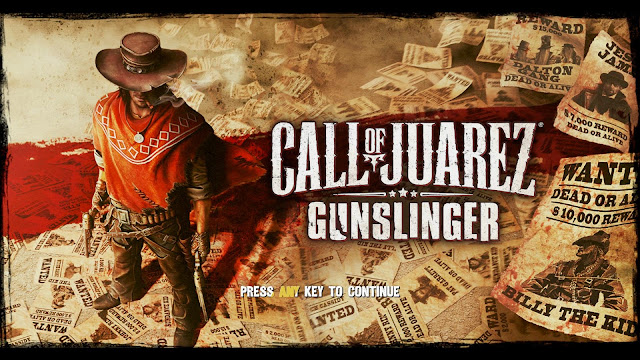 Gunslinger shares many similarities with its predecessors; dual revolvers, dueling, slow motion and unfaultable gunplay, this outing has for whatever reason (I presume development costs) decided to steer away from the fantastic semi-open world gameplay of CoJ Bound In Blood, in favor of a very linear arcade style shooter. Gunslinger is missing many of the innovations made in previous games like horseback gunplay, epic set pieces and true character development, these losses do make the game feel more shallow as a whole, however the fun to be found in the game stands strong.

The game begins with Silas Greaves entering a bar and sitting down for a drink, before long he ends up sharing a story with some folk in the bar, and thus we have our game. The entire game is told as a recollection, with running storytelling from Silas throughout, this method of storytelling felt somewhat similar to a very extreme version of the amazing storytelling in Remedy games Alan Wake and Max Payne. Being that the story is a recollection, the way the conversation between Silas and his audience flows directly affects the game itself, the plot jumps and skips backwards and forwards as Silas remembers the story – and its a genius way of both storytelling and directing the player.

Parts of the story end up being retold multiple times from different perspectives, one level in the game started being told someone in the bar, a telling of marching through the town to assault a bank – the story told in the legends, Silas cuts in before the climax – “Sorry son, but that’s not how it went down at all” – The game turns western filmgrain and begins to rewind, “It was dusk, not high noon, I was riding in from the east…” – The sky darkens before our eyes and we are suddenly set behind the bank instead, the story continues from Silas’s perspective.

Another memorable moment from the story involves Silas telling how he spotted a shortcut path, the ingame camera cuts to the shortcut and a path forms from seemingly nowehere – the next few minutes of fighting eventually lead you to an ambush and death, with the same ‘Game over’ screen you would normally get from dying – “Im sure glad I didnt opt to take that path, im sure that would have ended badly” – The game rewinds. This unique method of introducing alternate universes was very cool, and something I haven’t really seen in an FPS game before.

At the core of Gunslinger is of course the shooting, and the shooting is fantastic Some may argue that the game is not much more than a shooting gallery throughout, but is that really that big of a problem? What else were you expecting to do in a first person shooter game?
Gunslinger addresses this problem by making the shootouts so satisfying that you end up quite happy to fight against constant waves of bandits assaulting your position.
There are only 4 proper weapons in the game, sounds bad, but in reality you will happily just use the dual revolvers to kill everyone, because revolvers are fucking sweet. Guns shoot true, headshots are powerful, reloading whilst firing isn’t a burden (firing cancels reload animations), and the special abilities really add to the experience as a whole.

What special abilities? Gunslinger has a ‘concentration’ meter which can be activated even when half full to give Slow-mo and enemy highlighting, this bar refills pretty damn fast (especially later in the game after upgrades) and really helps even the odds and in turn allows the game to throw more enemies at you at once.
Another special ability is called ‘Sense of Death’ and acts as a last chance system, it refills on its own over time and is activated automatically upon taking lethal damage – the camera zooms in on an enemy and time slows, the bullet becomes visible, you get a chance to dodge the shot which would kill you by leaning left or right, if successful you gain a slight second wind and have a chance to clear enemies or get to cover. It is very similar to the showdown sequences in ‘John Woo’s Stranglehold’, and is just as satisfying and awesome to look at here.
Finally there are the reflex segments, which are gunslingers method of introducing quicktime events to the game, this again plays out very VERY similar to the showdown sequences in stranglehold, but with a quicktime twist – The camera cuts to new enemies and time slows, then key prompts appear on screen   (WASD for me), pressing the right key fires a bullet at the enemy and the camera spins around to the next, failing the encounter means a cut back to normal FPS action where you will have to dispatch them all yourself (usually at your disadvantage since there will be 6 of them from all directions).

There is also an XP system integrated into the game, pretty standard affair, you gain XP for stylish killings, combo kills, finding secrets…. Y’know, normal arcade shooter stuff.
The XP buys upgrades in 3 trees (Revolvers/Rifles/Shotguns) and most of the upgrades are sweet.
Upgrading the revolver tree for example allows you to reload faster, shoot faster, more concentration, concentration refills upon 6x multiplier…
Rifle tree is based more around ranged encounter, so more zoom, slight slow-mo on aim.. etc
and the shotgun tree is based around that bucka-buck.
Getting through the trees awards the player with new upgraded weapons (quickload revolvers, faster firing rifles, Dual sawn off shotguns…) and is a nice little reward for speccing heavy into a single tree.

Finally, there are the bosses, who are introduced via an awesome little cutscene which turns into western drawing. Most of these end up as showdown duels but some are on gatlings or other things.
The showdowns themselves are pretty good, I think I preferred the draw style in CoJ:BiB (Sweep mouse down to grab gun, pull mouse up to aim and fire) however the playstyle in Gunslinger is certainly tense and skillful.
Left/Right controls your hand position, you want to keep your hand over your gun to increase your ‘draw speed’, your mouse controls your focus, maintaining focus on your enemy results in a gradual zoom allowing for better/easier shooting in the actual firing phase. When your opponent goes for his gun, ‘fire’ draws your gun and then you get to play with the floaty crosshair as you try to fire before he does, firing before your fully draw your gun ends up wasting a shot and essentially getting you killed. 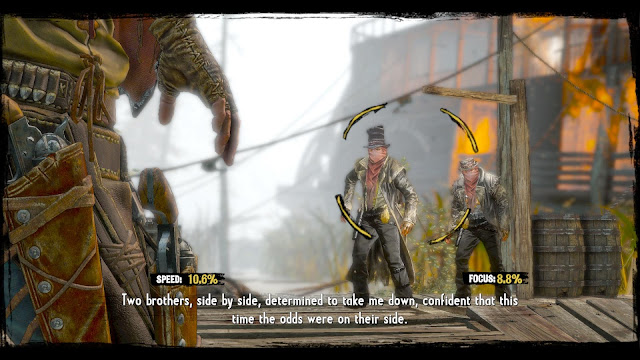 Worth noting also, that completion of the game unlocks ‘True West’ mode, which is basically a completely HUDless experience. It is AWESOME. Single revolver and rifle now have their purposes as precision weapons, whilst dual revolvers are trickier to use because of the lack of a crosshair.

I’ve written a hell of a lot for such a ‘small’ game. I should wrap this up.

Verdict:
Call of Juarez: Gunslinger is a brilliantly made run and gun FPS game, it may not have the depth of  the so called AAA titles but the actual fun from gunfighting in this game easily tops that of Call of Duty, Bioshock Infinite, and other big titles from massive studios. This game with its tight shooting mechanics and unique storytelling method may well have just snuck its way into my next top 10.
Gunslinger is far from long, but then, its far from expensive. Pick it up and enjoy the ride the next time you fancy shooting guys without thinking too much. 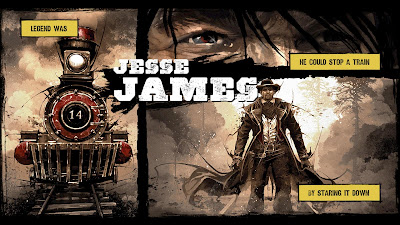