‘Rotastic’ , Released in October 2012 for PSN, XBLA and Steam, I can see where they were going with the name, but if im honest, I can only think of Rotisserie chicken when I see the name ‘Rotastic’

The gameplay here is based around rotating around pivots, and im sure i’ve played another game like it, but I cant for the life of me think where i’ve seen this game concept before.
I got up to world 5 during my half an hour playthrough, that’s about half the game I might add since there are only 8 worlds. 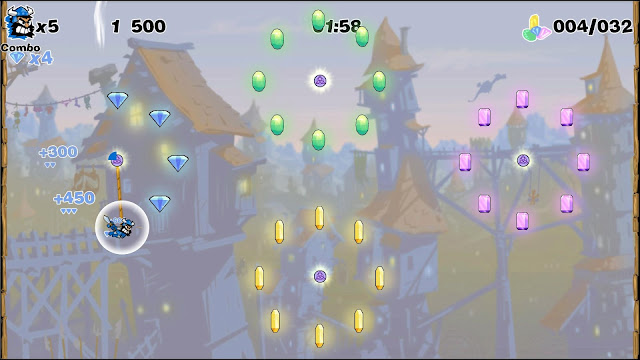 Levels are split roughly into ‘Collect the Gems’, ‘Break the crates’ (which oddly turns the game into ‘breakout’ of some form), ‘Survive’ and ‘Duels’.
Pretty much all of the level types play out exactly the same, hookshot onto pivot points and use centrifugal force to fly your way around the level to pickup/dodge shit, there are tricks and little maneuveurs you can do to boost your points, but honestly most of them just reward you for playing the game normally.
The Dueling/Battle mode however is a little more interesting, this still essentially the same gem collecting game as before, but now there are between 2-4 players on the field, and crossing other’s ropes will allow you to cut them – its equal parts collection and trying not to be caught out and is actually pretty good – of my experience with the game, the small multiplayer bits were the best and so I would presume that local 4 player would be pretty good. 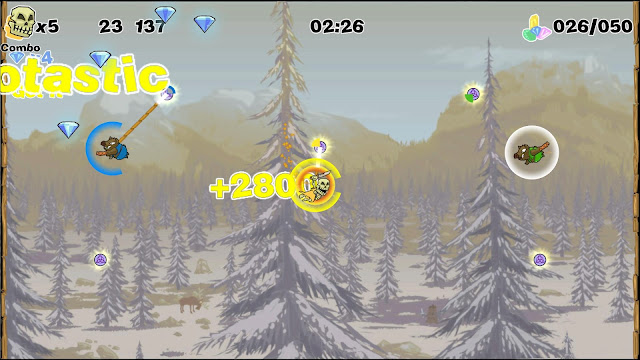 Graphics and sound are pretty terrible, the art is just about good enough to pass for this sort of game, but many of the levels are incredibly dull looking. The music was horrible, some shitty flute track which seemed to loop every 10 seconds.

I’d also like to add that the game crashed on me twice in the 30 ish minutes I spent playing. Which is less than ideal.

Verdict:
Honestly, im surprised they managed to get released on XBLA/PSN/Steam, it doesn’t really seem much more fleshed out that some flash games out there, and for the most part, its not even particularly fun.
I wouldn’t waste time with this unless you have 3 friends onhand to give the 4 player local multiplayer a go.

Approximate Game Length :  <2hrs
Actual Worth / Shop Price :  £1 / £8 (Steam) = 0.125
Should you play it : Nope, Barely worth the 450mb bandwidth allocated towards downloading it, and certainly not worth £8 , though perhaps give it a download should you have some friends come over, it might see 15 minutes of play, maybe.
Rating: 1/5