Little inferno was released in late 2012, it’s developed by ‘Tomorrow Corporation’ and features work by Kyle Gabler, the same artist and musician from World of Goo – To the extent where many people, myself included, just sort of logically came to the conclusion that this is made by the same people. Unlike World of Goo, Little Inferno didn’t achieve critical acclaim, nor is it going to anytime soon.
It’s a bizarre little thing which plays similar to many odd flash games of the past, and sort of actually reminds me of the ‘desktop destroyer’ program I used to mess around with as a child (the one where you can take a chainsaw to your desktop and stuff).
Majority of Little Inferno is set infront of a fireplace, and ‘Gameplay’ is based around purchasing stuff for coins, waiting around for it to arrive, and then setting it on fire – upon which it’ll drop more coins than it was purchased for, its a vicious cycle, buy, burn, buy , burn, yet is oddly satisfying for an hour or two, some items have unique effects when burned, some items explode, others get up and leave, some spawn more items.

There are also puzzles to figure out, in the form of ‘combinations’, essentially a list of 100 combos with hints as to what they consist of, for example, ‘Poker Hand’ combo is achieved by burning both a Hand and some poker cards at the same time. These vary in complexity and obscurity, with certain combinations making borderline no sense (to me at least). 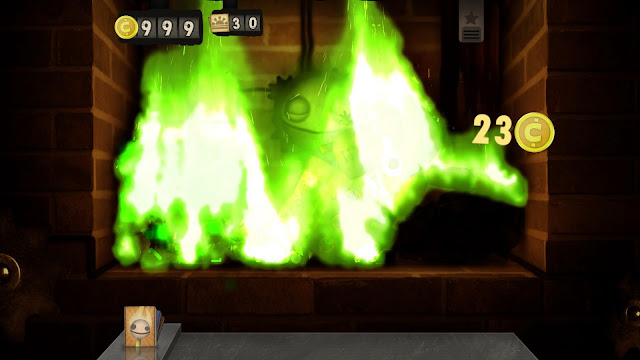 Graphically, the game looks wonderful, the fire effects are very pretty, and item descriptions/animations are entertaining. Similarly, the music is pretty good for the few short instances where it stirs up, the music sounds very World of Goo though, and often you’ll wish you were playing that instead.

The story does sort of progress, but it’s really not worth the payoff, the final segment could easily just not exist and nobody would be any worse for it.

Verdict:
Little Inferno was pretty disappointing overall, yet setting things on fire for a couple of hours is oddly satisfying, Its in the Humble Bundle right now, and for the price of ‘what you want’? its probably worth it, but the regular asking price of £7 is absurd.

https://www.humblebundle.com/
Go grab the humble bundle! You get Hotline Miami if you beat the average (and that game is fucking sweet) or you can just pay something minimal and a copy of this and Dear Esther (with some other meh games tacked on)
ps. Awesomenauts is fucking terrible. Just putting that out there.